Money makes the world go round, but relationships are what truly build lasting connections to donors and support for our organizations. This session will teach you how to build these connections, from finding prospects, to opening dialogue, all the way to closing a gift. This session focused on individual prospects, from friends to philanthropists.

END_OF_DOCUMENT_TOKEN_TO_BE_REPLACED

“Leaders of the Future” – How Nonprofits Work

Whether serving on a board or helping with programs, getting things done in the nonprofit world is immensely easier if you understand how nonprofits work. This session gave the basics of nonprofit operation, including budget, mission and purpose, the role of the board, staff and volunteers, bylaws and grant agreements, and how you can get involved. END_OF_DOCUMENT_TOKEN_TO_BE_REPLACED

“Leaders of the Future” – Effective Social Media Posts: A Primer

Facebook, Twitter, Instagram and other social media platforms have become not just an important way to get out your message, but the most important way to get out your message. While everyone seems to have social media, a quick scroll through the average social media feed shows that we greatly vary in our ability to use these tools effectively and craft the messages that work. This workshop was designed to close that gap and will be useful not only to contribute to nonprofits, but in anything that you want to do. END_OF_DOCUMENT_TOKEN_TO_BE_REPLACED

On February 23, 2021, Rabbi Darby Leigh spoke at the Center for Jewish Education’s ASL Meet Up to celebrate Jewish Disability Awareness and Inclusion Month.

From Isolation to Elevation: Tips to Disability Inclusion and Belonging

Jennifer Fink is a social entrepreneur and management consultant whose passion lies in promoting behavioral and community health to empower individuals learning to cope with mental health challenges. Due to an accident and illness in her mid-20s, Ms. Fink lives with nonvisible disabilities, anxiety, and depression. Fink had founded a nonprofit and co-authored a children’s book supporting military children. She collaborated with the Obama White House’s Joining Forces Initiative, and due to Fink’s finesse, former First Lady Michelle Obama filmed a video for a USO Asia-Pacific Tour that Fink co-led. A captivating and relatable storyteller, she weaves humor and grace as she embraces and shares her story, wisdom, and lessons learned from her journey. 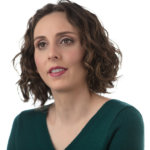 Dr. Arielle Silverman has been both Jewish and blind since birth. She has worked with Jewish camps, congregations, and other organizations to help build a culture of inclusion. Dr. Silverman has also studied and conducted research on the psychology of disability. She speaks on the tensions between her intersecting disabled and Jewish identities; simple principles for fostering inclusion across ability lines; and learning to correct our own biases toward people who are different.

For Jewish Disability Awareness and Inclusion Month 2021, Lauren Appelbaum, Vice President of Communications at RespectAbility, spoke about her work.

Shelly Christensen from RespectAbility’s Speakers Bureau spoke about disability inclusion at the Reform Temple of Rockland for JDAM 2021.

From Moses to Marlee: Celebrating Jews with Disabilities and Diverse Identities through Conversation, Creativity, and Music

Intelligent Lives stars three pioneering young adults with intellectual disabilities—Micah, Naieer, and Naomie—who challenge perceptions of intelligence as they navigate high school, college, and the workforce. Award-winning actor and narrator Chris Cooper contextualizes the lives of these central characters through the emotional and personal story of his son Jesse, as the film unpacks the shameful and ongoing track record of intelligence testing in the United States.