LGBTQ+ People with Disabilities and the COVID-19 Crisis 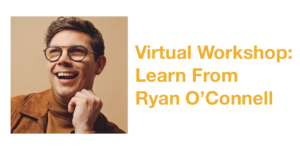 To address this, RespectAbility is hosting a new series of virtual workshops for people with disabilities in the entertainment industry. The first workshop will take place Wednesday evening and will feature a conversation with Ryan O’Connell. O’Connell, who is openly gay and has cerebral palsy, broke new ground for representation of LGBTQ+ people with disabilities with his Netflix series Special. Learn more and RSVP here: https://www.respectability.org/2020/02/ryan-oconnell-webinar.

“In this time of crisis, it is important that shows like Special exist to show everyone that our lives are just as valuable as everyone else’s.” said Eric Ascher, RespectAbility’s Communications Associate, who is both openly gay and on the autism spectrum.

Netflix has renewed Special for a second season, and Season 1 is available to watch now.

Find more resources for LGBTQ+ people with disabilities in our Solutions Center. RespectAbility has been on the front lines during the COVID-19 crisis, and you can find more coverage of COVID-19’s impact on the disability community at www.RespectAbility.org/COVID-19.

Next: RespectAbility Invites People with Disabilities to Share COVID-19 Experiences and Organize Online