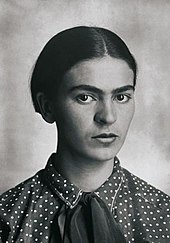 Kahlo was married to artist Diego Rivera; each of them had lovers as well. Kahlo had affairs with both men and women, including movie stars Dolores del Rio, Paulette Goddard and Maria Felix, among others. Her painting Two Nudes in a Forest clearly shows her attraction and love of women. One of her affairs was said to be with American painter Georgia O’Keeffe.

The LGBTQ community and the disability community intersect in many ways. Among lesbian, gay and bisexual adults, 30 percent of men and 36 percent of women have a disability.

At the age of six, Kahlo was bedridden will polio. The polio virus cause damaged to her right leg and foot. She was left with a limp. Her father thought that playing soccer, wrestling and swimming would help her recover. 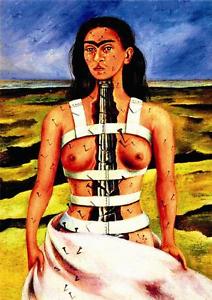 Some examples of her art that portray her disability include The Broken Column (1944). In this painting, she depicts herself standing on the beach. The beach is in the background while her body is shown in the foreground of the painting. Her body is open down the middle showing a rod and restrictive medical corsets, which she had to wear for most of her life. There are nails embedded into her skin – throughout her body. 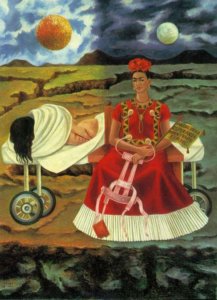 In the Tree of Hope, Keep Firm, she painted two versions of herself. In the background, on the left side, is the sun; on the right side, is the moon. The ground on both sides is broken with deep crevices going across the canvas. Kahlo painted the back of her body with an open gash going down her back and across her hip. The left side of the painting shows her dressed in a red gown holding her restrictive medical corsets. She also is holding a sign that says, “Tree of hope stands firm.”

Studies show many people within the Latino and other communities hide their disability due to negative stigmas, but Kahlo illustrated hers in her art.

Many current leaders are using their voice to share their stories, educating people about both visible and invisible disabilities. They are defying the statistics and have remained highly successful with their disabilities. Notable examples include CNN anchor Anderson Cooper who is dyslexic, actor Josh Feldman who is deaf, comedian Stephen Fry who has bipolar disorder, Eddie Ndopu who has Spinal Muscular Atrophy, YouTuber Tyler Oakley who has depression, writer Leah Piepzna-Samarasinha who is chronically ill, model Aaron Philip who is a wheelchair user with cerebral palsy and journalist Melissa Yingst who is deaf.

People like Kahlo have made a difference – for people with disabilities, Latinos, women and those who identify as LGBTQ.

Next: More Than One-Third of LGBTQ Adults Identify as Having a Disability