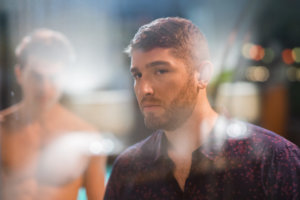 Josh Feldman did not see himself on TV growing up. “As a young kid, I wondered who my deaf gay role models were, so that I could have an idea of what deaf gay adults could do, or what kind of people they were in society,” he told RespectAbility.

That Feldman did not see representation growing up does not mean that LGBTQ people with disabilities do not exist. Among lesbian, gay and bisexual adults, 30 percent of men and 36 percent of women have a disability. Yet the number of LGBTQ characters with disabilities on TV today is still in the single digits.

Feldman decided to change that for future generations. He wrote and starred in This Close, a comedy-drama that premiered on Sundance Now in February. This Close was the first TV show created by and also starring people who are deaf.

The show tells the story of Michael (played by Feldman), a 20-something gay, deaf man. Michael and his friend Kate (played by co-writer Shoshannah Stern) navigate life in all of its complexity. They use sign language to communicate with each other. Relationship issues come up and are addressed. The show does not shy away from more risqué topics, including drugs and sex. The goal was to present something honest and representative, and Feldman and Stern delivered. The show was met with critical acclaim, and a second season was picked up in April. Feldman returns to the set this summer to shoot new episodes.

The LGBTQ community and the disability community share some of the same challenges. LGBTQ people and people with hidden disabilities have to decide whether or not to come out. Both LGBTQ children and children with disabilities face bullying and stigma, for which the consequences can literally be life and death. According to the Trevor Project, LGB youth are almost five times as likely to have attempted suicide compared to heterosexual youth. Forty percent of transgender adults reported having made a suicide attempt, 92 percent of them before the age of 25.

Feldman recognizes that representation matters when addressing these challenges. He told RespectAbility that “seeing ourselves in the media tells us we are not alone, and seeing positive role models in the media is also a guidepost for many people who wonder if they will be able to lead full, enriching lives.”

Other leaders also are using their voice to share their stories, educating people about both visible and invisible disabilities. They are defying the statistics and have remained highly successful with their disabilities. Notable examples include CNN anchor Anderson Cooper who is dyslexic, comedian Stephen Fry who has bipolar disorder, artist Frida Kahlo who had polio and spinal and pelvis damage, Eddie Ndopu who has Spinal Muscular Atrophy, YouTuber Tyler Oakley who has depression, writer Leah Piepzna-Samarasinha who is chronically ill, model Aaron Philip who is a wheelchair user with cerebral palsy and journalist Melissa Yingst who is deaf.

Feldman shared insights about his life with RespectAbility:

Q: What is it like to be part of both the deaf community and the LGBTQ community? How do the two communities intersect in your life?

Q: Do you ever feel like you have to choose between different identities?

For a long time, I had a difficult time both being deaf and gay, only because I was not fully out. The lack of representation in the media also affected that. As a young kid, I wondered who my deaf gay role models were, so that I could have an idea of what deaf gay adults could do, or what kind of people they were in society. We still have a long way to go on that front. I am hoping future generations of deaf LGBTQ kids will have role models they can look up to and see themselves represented in the media.

Q: You told the Huffington Post that, “I never saw myself on TV or in movies, so I never thought I could write about myself.” Why is representation so important?

Representation is important because so often those of us who feel “othered” in some manner or form (sexuality, disability, culturally, racially) can feel alone or slighted. Seeing ourselves in the media tells us we are not alone, and seeing positive role models in the media is also a guidepost for many people who wonder if they will be able to lead full, enriching lives.

Q: What do you think the next steps are for the LGBTQ rights movement?

I think the next steps are furthering representation, not just in the media, but on the political stage. We’ve been “othered” for so long, which is why we are still fighting for equality.

Q: How can we ensure that there is more accurate media representation of all minorities, including those who are LGBT and have a disability?

People in positions of power need to actively seek out intersectional people, whether for something as simple as a panel, or a new character in a movie, or a speaker at a conference. As intersectional people, we’re comprised of many different backgrounds, which means when we are represented, or asked what we think, the possibility is much higher of appealing to many more people who might identify with an aspect of our identities. If they don’t identify, then they will learn something.

Q: What advice would you give to young people in either/both communities?

The sooner you embrace all the different parts of yourself, and find a way to be able to be completely yourself, the happier you will be.

Next: Frida Kahlo: Role Model for Artists, People with Disabilities and Bisexual Women