Having a Visible Disability While Coming Out as Gay 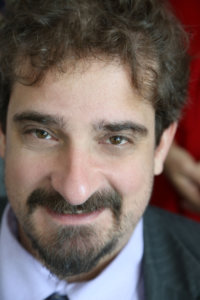 Living with a physical disability often means relinquishing a certain level of privacy. Growing up, I needed the help of parents transferring me in and out of our inaccessible shower and other activities of daily living, some of the most private moments of my day. I knew nothing different and it never bothered me, though that level of familiarity led them to believe they knew everything about me, as if I had no secrets. When I hinted during senior year of high school that I have been hiding something important, my mother couldn’t imagine, given that we were so close. Still, I lived in a small community and like others my age, was not ready to come out.

I came from a small high school that had few other students with visible disabilities in my class, and only one out gay student, to a university (University of California, Berkeley) of 30,000 students, many of whom were LGBT, disabled or some combination of the two. College offered a supportive environment to fully embrace my gay identity. Coming out, which always had been this big scary thought lingering in the back of my mind was easier knowing that I had a community that accepted me. Thankfully, when I finally made that plunge to tell my family my freshman year of college, they welcomed me with open arms.

The LGBTQ community and the disability community intersect in many ways. Between three and five million Americans with disabilities identify as LGBTQ. Among lesbian, gay and bisexual adults, 30 percent of men and 36 percent of women have a disability. The two communities also share some of the same challenges. LGBTQ people and people with hidden disabilities have to decide whether or not to come out. Both LGBTQ children and children with disabilities face bullying and stigma, for which the consequences can literally be life and death.

Yet, gay culture is stereotypically shallow. When I travelled to LGBT spaces outside the college community, I was welcomed but, as someone with a visible disability, I was seen as a figure who “braved life” in an inspirational way that always made me feel uncomfortable. Many gay friends and acquaintances focused on an ideal body type that I would never be able to live up to. 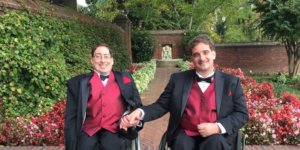 As I get older, I find myself attracting friends who either never went through or already passed their shallow stage. I have a rainbow coalition of friends from all backgrounds, sexualities, disabilities and political stripes. The one defining factor is that they all love and accept me for being my whole self.

In 2004, while attending the Democratic National Convention I met many other people with disabilities and many in the LGBT community; little did I know that would include my future husband, Justin Chappell. It wasn’t until late in 2010 that Justin and I truly reconnected. I’ve never met someone who had such similar interests, passions and temperament as me. While we first connected over politics, we also have a deep love of baseball, the same tastes in food and tv shows. Throughout our time together we’ve both seen and been a part of history, as we got engaged in 2011 but wanted to wait until marriage equality was the law in all 50 states before getting married. 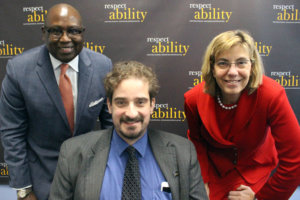 As a member of RespectAbility’s staff, I am able to both advocate for people with disabilities and train the next generations of leaders in the disability community as our National Leadership Program Director. Most importantly, I always strive to choose the most diverse candidates for the Fellowship. Just as I was able to push 2016 presidential candidates to prepare policies on mental health, employment of people with disabilities and benefits reform that will help others in the disability community who did not have the opportunity that I have, my current work educating and training fellows will ensure that the baton will be passed to the next generation of effective young leaders.

Ben Spangenberg is the director of RespectAbility’s National Leadership Program where he recruits and trains talented young leaders for careers in public policy, advocacy and media.

Previous: Jewish People Invited to Give Opinions on Disability Issues