At the Intersection of Deafness, Queerness and Being an Asian-American Woman 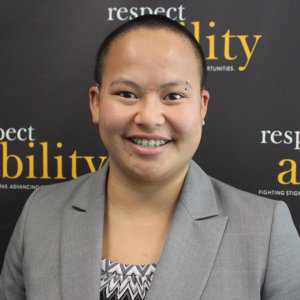 Hello, my name is Kaity, I am Asian-American, and I identify as pansexual and demisexual. Pansexual refers to someone who is attracted to all genders beyond the binary male and female genders, including genderfluid and transgender individuals. Demisexual refers to someone who does not feel a sexual attraction unless an emotional connection is established first. I also am profoundly Deaf in both ears and have cochlear implants.

I came out in November of 2016 a day after President Donald Trump was elected. I posted on Facebook saying that I was bisexual. Bisexual refers to one that is attracted to men and women only. I used the term bisexual because I knew that most of my friends and family would not know what pansexual was. My friends and extended family responded in a positive and supportive manner. My parents already knew I was pansexual.

I have known probably since high school that I was either a lesbian or pansexual. My orientation was fully confirmed when I met a woman at college who just totally caught my eyes. However, I am attracted to people regardless of their gender and the binaries. The University of Minnesota, where I attend, has more than 50,000 students, so the number of my crushes increased gradually over the next four years. However, I never had a relationship during those years. I did not find anyone I thought was worthy of my time and energy required to maintain a romantic relationship.

Because of the social frustrations and communication challenges I’ve endured as a Deaf, Asian, Queer woman, I often sought out adults, mentors and supervisors to have someone to talk to and for support. I love talking to adults because they are mature, sensitive, and they have experienced more life than I have. These are some values that I appreciate in a relationship.

I like to have deep, intellectual and sincere conversations. It’s important for me to get to know who each person truly is on the inside, and what their values are. Sometimes this type of conversation scares people at any age. Maybe they haven’t really thought about life that much; maybe they are not ready and do not know what to say. Friends tell me that the right person will come one day, but I find it hard to believe that there are people my age who are comfortable having deep, intellectual and sincere conversations. Unlike some people my age, my demeanor can be very serious and professional. I’ve been told by family that I need to “lighten up and have more fun.” I have learned that some people do not value a professional and serious demeanor in the same way I do. I simply have not found the right person with whom I can pursue a relationship.

Forming friendships and romantic relationships is difficult because of my Deafness, anxiety and shyness. Even with cochlear implants and my lip-reading skills, I fear that my inability to hear 100 percent will lead to miscommunications in relationships, which can lead to difficulties. Because of my Deafness, jokes, sarcasm, idioms and other play on words in English are hard for me to understand. This form of English seems to cover about 80 percent of how college students speak, and most are fluent in sarcasm.

A misperception about cochlear implants is that it cures Deafness entirely. That is not true. I have a hard time participating in social environments, especially when it is noisy or more than one person is talking at a time. I still have to lip-read, advocate for myself and ask people to repeat themselves. My parents wanted me to be bilingual and to have the option to hear or not. I am happy that they went ahead and got me implanted. Because at anytime, I can choose to speak, use American Sign Language (ASL) or use Cued Speech (CS). I also can choose when to wear my cochlear implants. When I am not wearing them, my world is completely silent. Cochlear implants can cost as much as a new car or SUV. Every five years, the cochlear implant has to be upgraded, so it is an expensive, life-long investment. Insurance does not cover all the costs, so some comes out of my own pocket. I chose to get my left ear implanted in 2010. I am not losing anything by getting it done, except for money. Cochlear implants are not a permanent solution. While it is a controversial point, I firmly believe that Deaf culture can survive even with an increasing number of Deaf people getting hearing aids and cochlear implants. I am an example of that. I became heavily involved with the Deaf community in college and improved my ASL skills. The Deaf community is an integral part of my identity, with cochlear implants or not.

Unfortunately, not all people want to be in a relationship with someone who has a disability. Another barrier is that whoever I am partners with or marry, that person will have to be comfortable with the possibility of having children who are Deaf. Regardless of whether I have children or adopt children, I want to raise children who are Deaf and/or have other disabilities.

All of my family, and most of my friends are incredibly accepting of my sexual preference, and my sexuality has not changed the quality of my friendships or relationships. I have some friends who are uncomfortable with or disagree with my sexual orientation, which is fine. I do my best to teach them about the LGBTQIA+ community, to share resources and invite them to Pride festivals.

As a Deaf, Queer, Asian woman with a disability, I constantly am worried about my reputation and how others perceive me. Yet, because of my disability, minority status and sexuality, I am able to identify with others who are also different. The intersection of Deafness, Queerness and being an Asian-American woman enables me to identify with multiple communities. Although I do not hear well, I have eyes that can see different perspectives and a heart that empathizes with and understands others.

Previous: Gay and on the Autism Spectrum: My Experience Growing Up in the Closet