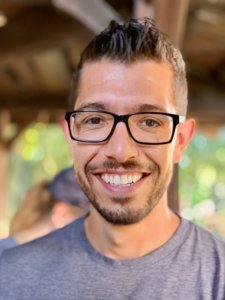 J. Everley is an award-winning independent film and TV producer who has worked in the industry for eight years. An early career in automotive tech and construction as a laborer and eventually job supervisor strengthened his innate analytical, managerial, and logistical skills. But what he craved was storytelling and the creativity of making stories come to life. He started making his own films to gain on-set experience, and learned as much as he could through masterclasses/webinars on nights and weekends while also working full-time. When he made the leap into filmmaking, his acquired skill sets proved invaluable, as the producer is, in many ways, like the general contractor of a film set. Three years into his career, he was diagnosed with a rare genetic blindness, but he has not lost his passion for and love of filmmaking.

Since his diagnosis, he has lost most of his central vision and is now legally blind. While he has found it difficult to continue with his additional work in post production as editor and color grader, he has devoted all of his energy into producing. His blindness has proved challenging in every aspect of his life, but he has learned how to adapt and excel. His “greeny-nominated” short film, “Whiskey Boys”, was an HBO’s Project Greenlight semi-finalist, and was released on HBO’s network. He went on to produce the 2015 Lionsgate National Storytellers Competition wildcard winning short film, “Masque”, which had over 3 million views, and secured an award at the 2015 Crystal and Lucy’s. His latest short, “Of Mine”, premiered at Disney Animation Studios and screened at festivals like Dances with Films.

In addition to producing, J. works with his creative partner, Cate Carson, under Sensorium Pictures. They’ve made short films, music videos, and other digital content – including one of the most successfully funded projects on Seed & Spark – “PURE” the series, which is currently in post-production. As a co-creator, he has developed “PURE” into a longer form series, and has an anthology series (“The Absolute”) which placed in several screenwriting competitions. He continues to develop future projects, including dark dramedy, whimsical fantasy, and suspense feature films, and a proof of concept for a dark comedy set to shoot as soon as safe to do so.

Adapting in life has bled over into his projects, creating a strength for problem-solving, and being able to work on-the-fly. And he has a knack for assembling the right team, which he believes is 50% of filmmaking. Ultimately, J. continues working toward collaborative visions that audiences respond to in the same way he did with some of his beloved childhood films.