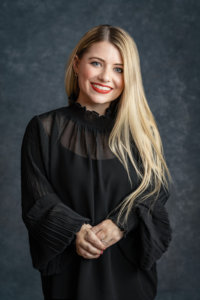 Born in California and raised in Nebraska, Ashley Eakin is a writer-director with a physical disability. This year she was one of eight women selected for the AFI Directing Workshop for Women and her project SINGLE was selected for the SXSW 2020 Film Festival and received the Special Jury Recognition Award. Eakin was also the recipient of the New York Women in Film Loreen Arbus Disability Awareness Grant.

In 2019 Eakin worked for and shadowed Mark Pellington on the Quibi series SURVIVE, filmed in the Italian Alps starring Sophie Turner. Prior to this, Eakin was the assistant to film director Jon M. Chu. In 2017 she spent 5 months in Malaysia and Singapore working on his critically acclaimed box-office hit CRAZY RICH ASIANS.

Eakin’s short documentary THE DETAILS, featuring Henry Golding and Awkwafina, was selected for the 2018 Hamilton Film Festival and her short film BLUE premiered at the 2019 LA Shorts Fest. Eakin is represented by United Talent Agency and Artists First Management.