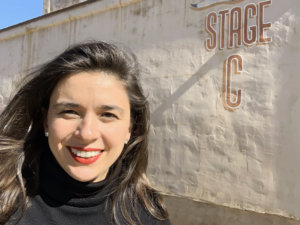 Alexandra Dean Grossi is a writer, designer and disability activist. Her work incorporates a multi-dimensional approach to inclusivity and accessibility, which utilizes storytelling, emphasizes user empowerment and seeks real-world solutions through Inclusive Design. Grossi began her writing career under the tutelage of television NYPD Blue creator David Milch on HBO’s Deadwood and John From Cincinnati.

Born profoundly deaf, Grossi wears bilateral Cochlear Implants. Attending mainstream schools, she followed the Oral Education route. On the margins of the Deaf Community because she didn’t use sign language, she found that she didn’t have any identifiable role models. This lack of representation of “her kind of deafness” in pop culture inspired Alexandra to write Oral, a loosely autobiographical comedic show concept around her experiences as a millennial deaf woman learning to “adult.” Grossi wants to be part of the fight for a more equitable representation of persons with disabilities in Hollywood telling their stories first-hand. Her goal is to executive produce Oral and serve as a head writer.

As an advocate for inclusivity, Grossi spearheaded several successful social media campaigns. Her work with Shane Bitney Crone launched his career as an LGBTQ+ activist and filmmaker. This campaign resulted in a viral YouTube video with more than five-million views, a successful Kickstarter campaign, and a feature-length documentary, Bridegroom. Bridegroom was introduced by President Bill Clinton at the Tribeca Film Festival where it won the 2013 Audience Award.

As an Inclusive Design Activist, Grossi works as a User Experience Designer for IBM Accessibility and is the Director of Inclusive Design for AIGA Raleigh (AIGA is a national graphic design association). She served on the leadership team of IDATA, a project funded by a $2.5 million NSF grant to make astronomy software accessible to blind and low-vision users. Grossi often gives lectures and serves on panels around disability and Inclusive Design. She writes about disability topics, and she is active in the disability space on social media.

Grossi is a graduate of Vassar College where she majored in English and Italian with a minor in Film. She completed her Master of Graphic Design from the College of Design at North Carolina State University. Her Master’s thesis centered on the design for an improved Cochlear Implant User Interface.