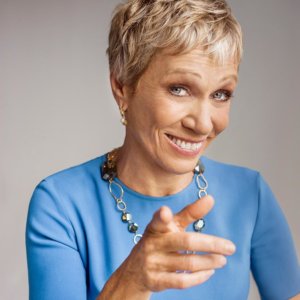 Barbara Corcoran is an American business woman who started a real estate brokerage business, The Corcoran Group, at the age of 23. Famous for her TV personality on ABC’s Shark Tank as an entrepreneur and judge, she credits her determination and drive to her childhood diagnosis of dyslexia.

“When you cannot pronounce the other words that other kids are reading readily and the kids are laughing at you or are shouting the wrong letter to you, or the wrong syllable to you, it’s as painful as a child that I have never gotten over it. Honest to God, I’m sure of that. And so, when I got out of school, I really decided that I’m going to prove once and for all that I am not stupid,” she said in an interview with Spectrum News NY1.

Hailing from Edgewater, New Jersey, Corcoran comes from a large family and is the second eldest of ten children, which taught her to interact with different personalities. In an interview with The New York Times she said: “Everybody’s got to mesh, so you get training early on for getting along with people. It’s a great advantage.”

Her successful journey in the employment industry began at the age of 11 where she would enjoy working after school hours. She held 22 jobs including being a hot dog stand lady and a waitress a couple of times before she got fed up of taking orders from people and decided to become her own boss. She started her own business The Corcoran Group in her early twenties.

“I didn’t even care what I was going to do for a living,” she said. “I just wanted to have my own thing.”

At the time, she had no experience but got a lucky break. “I met a man who after a couple of months became my very first boyfriend, who told me he thought I’d be great at real estate and said, how about I give you 1,000 dollars,” Corcoran said in an interview with People. She failed the Real Estate Brokerage exam three times but was persistent and eventually passed.

Decades later, she sold her company for $66 million in 2001 to NRT Incorporation, which is still one of the top-notch real estate businesses in the country. She recently stared as one of the 13 couples on Season 25 of Dancing with the Starsand was eliminated after two weeks of competition.

Corcoran is proving that people with disabilities, with the right support, can change these statistics.

“I have an M.O. of constantly being nice and meaning it,” she said in an interview with People. “Because an odd thing happens when you’re nice to everyone – people like you. When people like you, they’re willing to follow you or entertain your idea.”

Role models such as Corcoran make a big difference in setting high expectations for youth with disabilities. People with disabilities of all backgrounds can be amongst the highest achievers on earth. Haben Girma became the first Deafblind person to graduate from law school when she earned her degree from Harvard Law School in 2013. Harriet Tubman had epilepsy, performer Selena Gomez lives with lupus, actress Salma Hayek is dyslexic and gymnast Simone Biles has ADHD. Each of them, like Corcoran is a positive role model for success. Read more today:

Previous: How My Judaism Helped Me Accept My Disability