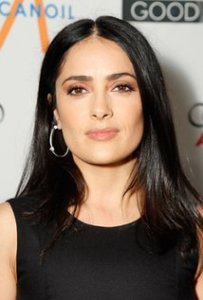 Actress and producer Salma Hayek Jiménez has embraced her disability – dyslexia – from a very young age. Born in Mexico, Hayek was sent to a Catholic boarding school in New Orleans at the age of 12 where she was quickly expelled for setting all of the nun’s clocks back three hours.

“I’m very lucky I didn’t have it easy, because I’ve learned so much from having to figure out everything on my own and create things for myself,” said Hayek. “Now I can teach what I’ve learned to the next generation.”

After boarding school, Hayek spent time at the Universidad Iberoamericana in Mexico City; however, she quit to pursue her acting career and left Mexico for Hollywood.

“I came here and I didn’t speak English, I didn’t have a green card, I didn’t know I had to have an agent, I couldn’t drive, I was dyslexic,” she said in an interview with Oprah.

But Hayek did not let any of that stop her. She adjusted. Reading scripts more slowly due to her dyslexia and working on her memorization skills so she would only have to read the lines once, she landed parts in major films such as Fools Rush In and Will Smith’s Wild Wild West.

“Some people read really fast, but you’ll ask them questions about the script and they’ll forget. I take a long time to read a script, but I read it only once,” said Hayek.

Over the course of her first ten years in the business, she saw a lack of Latina representation in Hollywood and set out to fill the gap. In 2000, Hayek opened Ventanarosa Productions. The first film her company produced was about Mexican painter Frida Kahlo (played by Hayek), who also had a disability. The film was nominated for six Academy Awards, including best actress.

While studies show many people within the Latino and other communities hide their invisible disability due to negative stigmas, Hayek is passionate about diversity and women’s rights and uses her voice to share her story of learning and living with dyslexia. Therefore, she is the perfect candidate for RespectAbility’s #RespectTheAbility campaign, which is shining a light on individuals with disabilities who are succeeding in their chosen careers.

Our nation’s economy is strongest when it is inclusive of the value that diverse talent brings to the workplace. Haben Girma became the first Deafblind person to graduate from law school when she earned her degree from Harvard Law School in 2013.Harriet Tubman had epilepsy, performer Selena Gomez lives with lupus, business leader and Shark Tank superstar Barbara Corcoran is dyslexic and gymnast Simone Biles has ADHD. Each of them, like Hayek, is a positive role model for success.

Today Hayek focuses her time on ending violence against women and sits on the board of a nonprofit called V-Day. She also started a campaign with Beyoncé, fashion designer Frida Giannini and Gucci to advocate for the empowerment of women.

Previous: Lois Curtis: Woman with Disabilities Fights for Freedom For All

Next: This Women’s History Month, I Remember the #MeToo Survivors with Disabilities