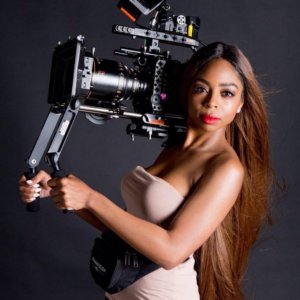 Kimisha Renee Davis is an emerging Los Angeles based writer, director, and cinematographer. She is dedicated to telling diverse stories that transform the world. She is all about positive vibes she loves creating dynamic visual storytelling through: screenwriting, detailed character development, selecting and manipulating lenses and cameras, composition, color design, and painting with light. Thus bringing beautiful stories to life.

She was recently invited to attend American Film Institute’s Directing Workshop for Women: The Interchange. She was awarded a scholarship to attend Directing: Visual Storytelling at Sundance Institute Collab. She received a SLED Grant to attend the Lighting for Film and Television Maine Media Workshop. She was awarded a grant from ZEISS Cinematography Lenses through Women in Media. She was selected to attend Sony EDU. She was sponsored by Panavision and RED Digital Cinema to attend the Cinematography Intensive for Women at American Film Institute. Additionally, she was named ‘A Rising Star in Cinematography’ by Anton Bauer.

Kimisha Renee hires at least 50% women, BIPOC, LGBTQ, and disabled cast and crew members on every project. She champions inclusion riders to hire diverse film production employees in leadership positions above and below the line. Additionally, her sets are environmentally friendly to support efforts to end climate change. She especially enjoys action, adventure, fantasy, science fiction, and super hero films. She is committed to creating ones that have super heroines, BIPOC characters, and Afrofuturistic themes in the forefront. She is in pre production on her short film Prima and she is in development on a feature film and television series.

Davis’ life circumstances has significantly influenced her passion to pursue authentic diverse representation behind the camera and on screen. She especially supports and celebrates disability initiatives because of her personal medical journey and because she believes that everyone’s voice matters.