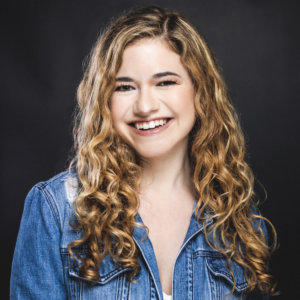 Carolyn Portner is a comedy writer, podcast host and stand up comedian based in Los Angeles. She is currently the writers’ assistant on Netflix’s upcoming sitcom Pretty Smart and recently wrote Episode #211 “Tainted Love” for Season 2 of ABC’s Mixed-ish. Previously, she was the writers’ assistant on ABC’s The Conners and supported writers rooms for CBS’s Young Sheldon and NBC’s Trial And Error.

Carolyn lives with a rare genetic bone disorder called Multiple Hereditary Exostoses (a rare disease where she was born with large benign tumors on her bones) and ultimately had three major operations before turning eighteen. Now donning titanium hips, she performs stand-up all over Los Angeles and produces a monthly comedy show, “Get Spunky!” in Silverlake.

Carolyn also hosts and produces a comedy podcast called Medium Rare, which explores identity around visible and invisible disabilities with the mission of answering big questions like “if we’re all cooked up differently, what brings us together as human meat?” She hopes her writing and stand up can encourage others to claim ownership of their disability experiences rather than hide it.