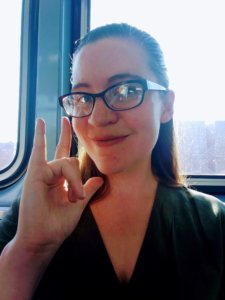 Carin Powell is the creator, writer, and director of the forthcoming animated short With The Beat. Having gotten her start as a 3D animator, Powell rose through the ranks at Anamon Studios in San Francisco, becoming a lead animator and fix team lead on their short film, Let’s Eat. In January of 2020, Powell – along with her producer Nora Ng-Quinn – co-founded Signing Animation, a California non-profit dedicated to correcting employment disparities for Deaf artists in the film industry.

This is a second career for Powell, who was a professional classical musician for fifteen years before transitioning to animation. Ever since her parents started explaining the special effects in Star Trek as a way to reassure 5-year-old Powell that the actors weren’t in danger, she’s been in love with movie magic, and she was inspired to switch to animation following a viewing of Pixar’s Monsters University. She had the good fortune to secure one-on-one lessons in Maya from animator Eric Cerda, then continued her education at Cañada College under Paul Naas, eventually learning and working at Michal Makarewicz’s Animation Collaborative in Emeryville. It was there Powell learned about Anamon Studios. After Let’s Eat successfully wrapped, she decided to use her leadership experience to make a difference in her industry by empowering Deaf/Hard of Hearing artists to tell stories about Deaf culture in the medium she loves.

Today, Powell and her dedicated crew are in visual development on their short With The Beat, a story of artistic truism and the power of embracing one’s identity. Production updates and opportunities can be found at signinganimation.com