Everything’s Gonna Be Okay premieres on Freeform on Thursday, January 16

Los Angeles, Jan. 16 – Newcomer Kayla Cromer is breaking barriers in the entertainment industry as one of the first people on the spectrum to play a character on the spectrum in a lead role. A neurodiverse actress and activist, Cromer stars as Matilda, a high school senior who is driven to succeed and is on the autism spectrum, in Freeform’s new comedy series, Everything’s Gonna Be Okay.

Before Cromer started to pursue a career in the entertainment industry, her original goal was to attend the FBI Academy and become a criminal profiler – a passion of hers since her pre-teens. After being invited to model in a San Francisco photoshoot and one of the photos went viral, her modeling career took off. Cromer has appeared on magazine covers and editorials nationwide, which led to getting represented in both San Francisco and Los Angeles. Now she is focusing on her acting career, with role models like Kiera Knightly and Orlando Bloom, who both have dyslexia.

The role of Matilda became “an opportunity to play a character authentically and advocate” for Cromer.

“Comedy is being authentic, being yourself,” she added. “Both my character and I can be hilarious, without even knowing it.” 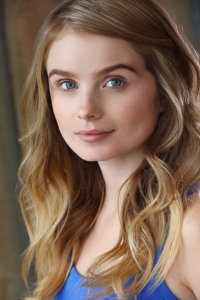 With one-in-five people having a disability in the U.S. today, the lack of representation – just 3.1 percent on screen – means that millions of people are unable to see themselves in media today. Of those, 95 percent of these characters are played by actors without those disabilities. Everything’s Gonna Be Okay is bucking these trends with the character of Matilda and casting Cromer.

Cromer’s agent, KMR Talent’s Gail Williamson, who represents actors with disabilities exclusively, said the first audition for the role of Matilda was Kayla’s.

“After seeing her work, they knew they would be able to work with someone on the spectrum for the role and only considered actresses on the spectrum moving forward,” Williamson said, recalling the producers statements during a Q&A. “Kayla was the final choice, but she advocated for all actors on the spectrum that day.”

Because of authentic casting – and discussing scenes in pre-production with Cromer, including re-writes – the character of Matilda is refreshing.

“I have autism,” she says in the show, matter-of-factly and with confidence, later stating, “I really don’t like hugs” before offering an alternative greeting.

Cromer was first diagnosed with ADD, dyslexia and dyscalculia when she was seven years old. Her diagnosis of Asperger’s came later, which is common, as women and girls are less likely to be diagnosed as being on the spectrum than men and boys. As none of her disabilities are visible, Cromer revealed she is neurodiverse publicly just last year.

“Even though I had learned to advocate for myself in life, I was scared to shine light on it professionally,” she said. “Having the support of my Everything’s Gonna Be Okay team helped me to embrace my disclosure. I feared being labeled and typecast. I want to explore and expand my craft into different genres, to play neurotypical characters too. My biggest dream is to train and join Marvel Cinematic Universe! I am determined to break stereotypes!”

Cromer noted that since disclosing publicly, “the reaction has been very positive and created an amazing snowball effect.”