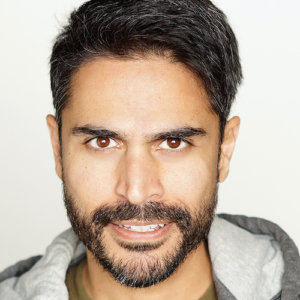 A graduate of the Stella Adler Conservatory for Acting, Ru Kazi has acted in both contemporary and classical plays, directed a critically acclaimed theatre production of OUR LADY OF 121ST STREET from Pulitzer Prize-winning playwright Stephen Adly Guirgis at The Victory Theatre in Burbank, and has made television appearances in shows such as 2 BROKE GIRLS, NCIS and a recurring role on NBC’s THE GOOD PLACE. Kazi has made several award-winning short films, including LAST TO REPEAT, nominated for 12 awards, including Best Director and runner up for Best Film, and winner in the Cinematography and Sound Design categories at the 2015 Los Angeles 48 Hour Film Festival. Kazi regularly performs improv comedy as a main-stage player at the Upright Citizens Brigade Theatre, Second City Hollywood, and The Improv Space. In Kazi’s free time, Kazi plays drums in a social justice punk rock band that regularly plays at famed Sunset Strip venues such as Whiskey-A-Go-Go and The Rainbow Room. Kazi was cast as a lead in a world-premiere play called THE SPANISH PRAYER BOOK which will run during the Fall of 2019 at The Road Theatre. The play will also star journeyman actors Stephen Tobolowsky (GLEE, DEADWOOD) and Bruce Katzman (LAW & ORDER, CURB YOUR ENTHUSIASM).