Poll: Most California Jews Don’t Know Any Rabbis or Staff with Disabilities

Los Angeles, California, Jan. 9 – More than 4000 respondents participated in a RespectAbility survey focused on the inclusion of people with disabilities in faith communities in America. This includes 183 Jews with disabilities in California and additional 79 with no disability connection in the state. Fully 104 of the respondents reported that they are served by the Jewish Federation of Greater LA. Nationally the poll includes more than 900 Jews who self-disclose that they are a person with a disability. 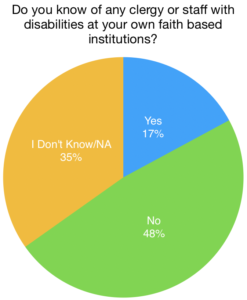 The California numbers track with the opinions of the national sample of Jewish respondents (2,570), that a series of issues are all seen as relevant in the following order of importance: protecting access to healthcare, Medicaid and SSDI for people with disabilities (44 percent), enabling them to get the education and jobs that they need to succeed (30 percent), fighting stigmas (18 percent) and increasing inclusion for people with disabilities in faith based institutions (eight percent).

Nationally, 85 percent of Jewish respondents are concerned about increasing inclusion of people with disabilities in their faith community, including 35 percent who are extremely concerned. Among California Jews with no disability connection, only 22 percent are extremely concerned. Still, while it is important to them to increase inclusion, it also is clear that of primary concern are healthcare, education and jobs.

Respondents ranked many areas of Jewish life as very important to extremely important to include Jews with disabilities, from Jewish Day School to holiday programs, and from youth groups to assisted living.

Said Delbert Whetter, one of RespectAbility’s Los Angeles-based board members who is deaf that advocates for greater recognition and collaboration between the greater Los Angeles Jewish community and local Jewish Deaf and hard of hearing groups and programs, “Overall, Jews with and without disabilities are not fully satisfied with the level of inclusion in the Jewish community, but there is growing optimism and belief that, with increased community engagement, this can change dramatically for the better.”

Nationally, 38 percent of Jewish PWD respondents feel that the community is doing “a little better” on inclusion over the past five years. In California these progress numbers are more encouraging with 56 percent of Jews with a disability connection describing inclusion as a “little better” (51 percent) or “much better” (11 percent). Of note, 35 percent of California Jewish respondents with no disability connection “do not know” if there has been any improvement over the past five years, pointing still to a lack of awareness and an opportunity to increase inclusion.

When asked, “Aside from an individual’s family and friends, which part of the community is most responsible for increasing inclusion of people with disabilities,” the leading responses in California is synagogues (30 percent), followed by Jewish Federations (19 percent).

Jews in the California disability community also point to social organizations (19 percent) as the most challenging areas for inclusion, followed by Jewish Day Schools (17 percent).

Nationally, more than a third of Jewish respondents with a disability identify the biggest barrier as “prejudice and unacknowledged stigma against people with disabilities.” Jews with no disability connection note prejudice first as well at 28 percent but other answers again point to opportunities to increase inclusion in that another 37 percent combined point to the largest barriers being a lack of information rather than will:

The top type of disability noted by members of California’s Jewish community is mental health. Indeed, 21 percent of the Jewish respondents personally have a mental health condition or someone in their household does. In California, this number is 18 percent. Said Linda Burger, Treasurer of RespectAbility and CEO of Jewish Family Services of Houston, “There is an epidemic of suicides in the Jewish community and we have to address this.”

California Jews in the disability community noted in open-ended responses a series of events when they were not included, such as:

Aside from a wonderful program at Camp Ramah in CA, it has been made inordinately difficult to include our son in any meaningful or helpful way at 2 different synagogues in the SF Bay area despite every effort on our part to have him included with the least amount of disruption and offers/requests to help us help them support him. My husband and I both grew up regularly attending services and would never have missed High Holy Day services, now, because no one ever included our son, now a teenager, we just can’t.

Children we service that would like to attend Jewish Day schools are unable to because of the limited resources available here in LA.

Shabbat hikes, Shabbat at the beach–no easy safe access to the bimah…

Said Isabel Maxwell, RespectAbility’s California-based senior advisor, “We are a stronger community when we live up to our values— when we are welcoming, diverse, moral, and respect one another. We want our children, parents, grandparents, and other family and friends with disabilities to be able to have an equal opportunity to participate in our community.”

Previous: Webinar: From Longing to Belonging with Shelly Christensen

Next: Terumah: by Neil Jacobson