Stephanie Farfan: Using her Voice to Educate People about Visible and Invisible Disabilities 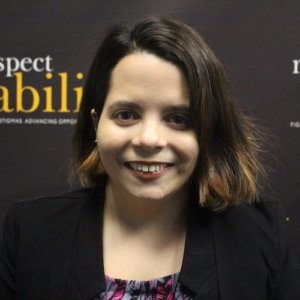 A young Latina, Stephanie Farfan is both completing her master’s degree and working at RespectAbility, a nonprofit fighting stigmas and advancing opportunities for people with disabilities, as the Policy, Practices and Latinx Outreach Associate. Farfan first joined RespectAbility as a Fellow in the Spring 2018 Cohort. She returned in August as a full time staff member and already has made quite an impact. She was instrumental in the launch of RespectAbility’s new Spanish-language resource guide. She also represented RespectAbility at a Fiesta Educativa conference in California and even appeared on CNN Español to spread the word.

But before she started working at RespectAbility, she participated in interviews for other jobs. One of them, at a nonprofit near her school, sticks out in her mind. She excelled during the first part of the interview. Then, as Farfan puts it:

“The person who would be my direct supervisor came in and her eyes got really wide when she saw me because I’m a Little Person. Suddenly, she believed I couldn’t do the job, even though I was very qualified and it was just a data entry position. She kept telling me ‘I don’t think you’re smart enough. We really need to hire someone who is very intelligent and has very good attention to detail.’ I quipped ‘Well, I have a 4.7 GPA, I think I’ll be fine.’”

Farfan has been more than just fine. She has taken advantage of her unique perspective on life. In fact, she thinks that having a disability has improved her life in certain ways. Being a Little Person has “given me a community and a sense of culture,” she said. “It also shapes the way I see the world around me and how I react to things. If I didn’t have a disability, I wouldn’t have this personality.”

When she was sixteen, Farfan became involved with Little People of America and worked on their Hispanic Affairs committee. She answered emails, managed their Facebook page and interacted with new parents of Little People who didn’t know what to do.

Farfan believes that her success can be attributed to high expectations being set for her when she was younger. After she graduated high school, her mother said that she had to go to college right away. “Because [my mother] pushed me to find a really good school, I was able to learn about conflict resolution, find my place and find good mentors,” Farfan said.

College helped Farfan find mentors, but she believes that everyone deserves positive role models. This is why representation matters for people in minority communities, and Latinx people with disabilities are no exception. “By seeing ourselves represented, people learn that there are more opportunities out there and they have more motivation to keep going forward, keep being ambitious and keep dreaming.”

As the country celebrates National Hispanic Heritage Month, which began on September 15, 2018 and ends October 15, 2018, it is important to include Latinx and Hispanic individuals with disabilities as well. While studies show many people within the Latinx, Hispanic and other communities hide their invisible disability due to negative stigmas, Farfan is using her voice to share her stories, educating people about both visible and invisible disabilities. She is defying the statistics and has remained highly successful as a Latina Little Person.

Next: Poll: Most Jews Don’t Know Any Rabbis or Staff with Disabilities