Washington, D.C., Sept. 17 – When entertainment heavyweights convened at an annual disability advocacy summit this summer, they stressed the role of film and television in building understanding between communities by shattering prejudices of disability.

The “Fighting Implicit Biases through Film and Television” panel kicked off with Jonathan Murray, an expert film and television-maker with more than 30 years of experience in the television industry. Murray is the co-creator of The Real World, often credited as being the first modern day reality show, which premiered in the 1990s and posits the question “what happens when people stop being polite and start getting real?” This question drives the spirit of his works’ central theme: “to introduce and celebrate marginalized communities.”

The summit was sponsored by RespectAbility, a national nonprofit organization fighting stigmas and advancing opportunities for people with disabilities. The event consisted of panels on education, employment, media representation and intersectionality. Murray serves on the board of directors for RespectAbility.

Murray fights implicit bias through film and television “by introducing viewers to worlds and people they don’t know.  By focusing on love, compassion, and empathy. By celebrating differences rather than fearing them.” Murray invites his audiences into worlds that are foreign to them. He asks his audience to simply appreciate their similarities, yet understanding someone who is different is a struggle in and of itself. Murray led the audience to wonder: what are the challenges of understanding or loving someone who is different? 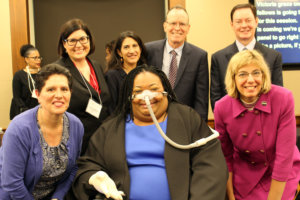 Among disability circles, Murray is known for creating Emmy-winning Born This Way, a documentary-style reality television show that follows the lives of seven young adults with Down syndrome as they learn to live independently, find employment and fall in love. His newest television effort, the special, Deaf Out Loud will premiere on Sept. 12 on A&E Network.

Premiered in 2017, Far From the Tree explores the challenge of parents embracing their children’s differences. “Everyone, even people whose children aren’t as dramatically different as children, sometimes feel alien and foreign,” said Solomon.

Eager to find more answers, Solomon went into the deaf community and found their struggle with conformity similar to his own experience as a gay man. “Everyone has an ongoing need to figure out how to love children who aren’t what they imagined when they set out to have children,” Solomon said.

With the multitude of ideas that are raised in Solomon’s book, one might recognize the challenge of putting together a film that captures the essence of Solomon’s 800-page book. For Dretzin, it was no simple feat. “The film tries to distill the very special spirit of the book and perspective of the book into an extremely different medium,” she said.

In her more than fifteen years career as a documentary filmmaker, Dretzin never had produced a film that focused on disability. Despite what might have been hesitation, Dretzin contacted Solomon through email and proposed making a movie out of his book. “I was seized with the desire to turn it into a film in part because the stories in the book and there are about 300 of them, are extremely cinematic in particular many ways, and also because it is a book about sort of about the challenges and difficulties of love and about the ways in which love prevails,” she said. Through working with Solomon, Dretzin has showed audiences that love trumps our preconceptions of disability.

Award-winning producer, filmmaker, writer, and activist, Emery also challenges prejudice in America through her filmmaking. Her most recent film Black Women in Medicine gives audiences insight into the lives of black women in medicine whose work is less credited than that of men. What Emery believes sets back her career even more as a filmmaker is that in addition to being a black woman, Emery is a quadriplegic. But Emery has not let that define her.

“I am not a brilliant filmmaker because I’m a quadriplegic,” she said. “I’m brilliant because I’m creative and talented and the quadriplegic aspect of my life gives me a different insight into how to live, but it does not define who I am or what I’m capable of, it should not define you either.”

“We have to change the narrative about people with disabilities, our capabilities, our competencies, our ability to achieve and contribute,” she continued. “It is the idea of how can we form through media a sense of inclusion and understanding from birth and from all of you as being key implementors of creating that circle of care.”

It is important to include children’s television in this conversation as well, as a child’s mind forms implicit bias by the age of seven. Senior Vice President of Community and Family Engagement at Sesame Workshop, Jeanette Betancourt addressed the profound impression that television can leave on children’s minds.

“We believed very much from day one on representation and inclusion in its widest forms, whether different abilities, different strengths, different races, ethnicities, culture, languages.”

As a community of brilliant thinkers, people with disabilities are capable of transforming minds. Through film and television, entertainment leaders have the opportunity to expose audiences to our experiences.

“I believe ordinary people can do extraordinary things,” Emery said before challenging the audience to do more. “But since everybody in this room are extraordinary, imagine what we can do collectively. Think about that. Let’s take it to the streets. Let’s command that we are seen.”

Next: Stephanie Farfan: Using her Voice to Educate People about Visible and Invisible Disabilities