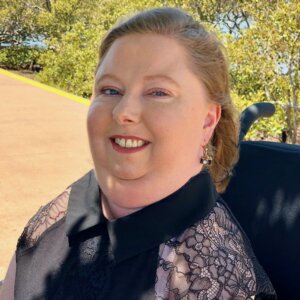 Hailing from the land down under, Stephanie Dower is a filmmaker, inclusion consultant, and public speaker based in sunny Brisbane, Australia. Working as a freelance filmmaker has seen Stephanie work across a variety of short films, television commercials and online content in the roles of writer, short-form editor and now producer. In 2021, Stephanie produced and edited the short film Sunshine, which was funded through Screen Queensland’s RIDE Shorts program and premiered at the Brisbane International Film Festival. Sunshinewould go on to screen at the Cleveland International Film Festival in the US.

A driving force of Stephanie’s career as a filmmaker has been her strong passion for reframing how people with disabilities are portrayed in popular media and art. Growing up with physical limitations due to Juvenile Rheumatoid Arthritis and relying on a motorized wheelchair for mobility has provided Stephanie a resilience and determination to prove to the world that disability is not inherently a negative experience. She wants to instead highlight the positive contributions and fresh perspectives that people living with disabilities bring to society.

To achieve this, Stephanie established her own production company, Dower Productions (dowerproductions.com) and is currently developing a slate of engaging and innovative projects which have already garnered global attention during their development stage. Her documentary travel series Carry On was selected for the Pitch FACTory at the Australian International Documentary Conference in 2019, which saw her and co-producer Breanna Roe pitch the project to local and international decision makers including Cinereach (USA), Discovery (UK), and NHK (JAP).

More recently, Stephanie has been developing the feature drama Seeing Scout, which was selected for the inaugural Attagirl Global Feature Lab. The film was later awarded the production prize through Sydney Film Festival and For Film’s Sake. The project is currently in late stage development, and is scheduled to go into production in the second half of 2023.

Outside of filmmaking, Stephanie is co-host of Attitude Foundation’s ReFramed, a podcast and vodcast series that analyses the portrayal of disability in mainstream films and television series.

Stephanie’s advocacy efforts in the disability space have recently seen her appointed to Screen Queensland’s newly formed Equity and Diversity Taskforce. She also has had opportunities to speak publicly at industry events and film festivals including the Gold Coast Film Festival and Australia’s premier film market, Screen Forever.