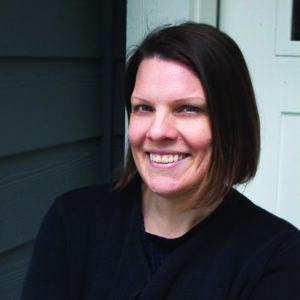 Kimberly Manky (she/her) is a writer and actor based in Victoria, Canada, on the ancestral, unceded territory of the lək̓ʷəŋən (Lekwungen) people. Originally from a very small town in Northern Canada, with the highest violent crime rate in Canada (not her fault), Kimberly grew up watching a lot of TV. At the age of 13, and inspired by SNL sketches, Kimberly approached the local cable access station and created her own sketch series. Loser Friendly was widely regarded as “Must See TV” (by her parents).

She studied Screenwriting at Oxford, Contextual Theology at St. Mellitus College, and received a Master’s Degree (with Honors) from the University of London in Screenwriting and Narrative Fiction. Kimberly has also taken Sketch Writing at Upright Citizens Brigade, Improvisation with the Groundlings, and Improv4Moms at Blind Tiger Comedy.

Kimberly has written for ABCmouse, Rakuten, Disney Interactive, and Oh My Disney, creating shareable content and quizzes like, “Which Golden Girl Are You?” (Dorothy, FYI). Recently, Kimberly was a writer on ABCmouse’s animated children’s series Everybody’s Garden, which focuses on teaching lessons of diversity, equity, and cultural humility. Her comedic TV pilots, specs, and screenplays have placed in numerous screenwriting competitions, and she was a finalist in the Nickelodeon Writing Fellowship and a semifinalist in The Academy’s Nicholl Fellowship in Screenwriting.

As a person with an endocrine disorder, anxiety, OCD and depression, Kimberly hopes that her writing can bring awareness, empathy and understanding to these human experiences. She aims to facilitate change and combat public stigmas and self-stigma, so that people who experience mental health issues view themselves in a more positive light. Kimberly is an advocate for people with visible and non-visible disabilities with the work she writes and produces, and in her current role as a Communications Manager for an accessibility entertainment company.