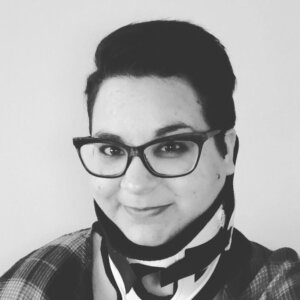 Ophira Calof is a multi award winning disabled writer, performer and producer. She appeared on-screen in a variety of productions including Tall Boyz (CBC) and Kids In The Hall (Amazon Prime), co-created the sketch comedy revue Generally Hospital (Canadian Comedy Award Nominee, Patron’s Pick, David Seguin Memorial Award), and her solo show, Literally Titanium, which has been featured in both academic and performance spaces as a case study in accessible production. Calof has also worked as a story and character consultant on a number of film and TV projects with production companies including Boat Rocker Media and Play Media, and her short films The Group Message and #HospitalChic have screened at TOSketchfest Film Festival and ReelAbilities Film Festival Toronto. She is a recipient of the Second City 2018 Diversity Fellowship, the 2018 Tim Sims Encouragement Award, and the 2021 Cahoots Theatre Promising Pen Prize. Recently, Calof has also created a number of disability arts projects including Making Space: Stories of Disabled Youth Past and Present, a storytelling series in partnership with Myseum Toronto, and Dis/Play, a multimedia project projecting the work of over 50 Deaf and disabled creatives onto exterior building walls throughout the city, created in partnership with the ReelAbilities Film Festival Toronto and ArtWorxTO: Toronto’s Year of Public Art 2021-2022.

Additionally, Calof works as a director, curator and facilitator who works to “crip the script,” centering disability knowledge and experience throughout process, production, and presentation. She is currently the accessibility process lead for AccessCBC, offering leadership on design and community building for the national pilot initiative that is providing training, mentorship, and funding to Deaf and disabled filmmakers, and is the curatorial committee lead for the 2022 ReelAbilities Film Festival Toronto. She has taught workshops on storytelling, writing, music, and disability arts for a variety of organizations including Toronto SketchFest, Bad Dog Theatre Company, University of Toronto, Centennial College, Next Stage Theatre Festival, Thatz Showbiz, and the Centre for Independent Living, created the courses “Sketch Comedy with Ophira Calof” and “Crip Storytelling,” and co-created the course “COVID-19 through a Disability Lens: Storytelling and Filmmaking Project,” capturing the experiences of young adults with disabilities and providing them with the tools to tell their stories, their way.