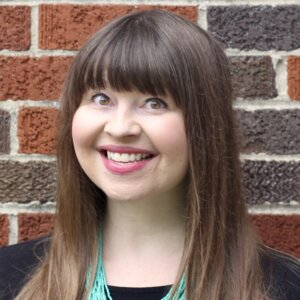 Maureen McEly spent more than a decade in unscripted television, working her way from PA to producer, before leaving that field in 2020 to pursue screenwriting. But within months of that decision, she became disabled by a neuromuscular autoimmune disease called myasthenia gravis. She spent a grueling year learning about her illness, adapting to her new physical limitations, and reimagining how to be a mother to her two toddlers. But after she stabilized, her illness didn’t stop her writing ambitions.

In 2021, she wrote a screenplay called WILD MAN, which became a Nicholl Semifinalist and a WeScreenplay Finalist. In addition to screenwriting, she began to publish short fiction and short humor. One of her short stories, We, Robot, became part of a book of parenting themed short fiction called AND IF THAT MOCKINGBIRD WON’T SING, which was published in early 2022. She has also had multiple short humor pieces featured on the popular satire website, McSweeney’s Internet Tendency.

Recently, she expanded We, Robot into a feature length screenplay called MOTHER’S HELPER. Inspired by her own experience, the screenplay explores becoming disabled as a mother of young children and all that entails – from grief and upheaval, to magic and possibility. Maureen deeply felt the absence of disabled and chronically ill parenthood stories in TV and film while navigating her own transition to disabled parenting. She has since made it part of her mission as a writer to bring these types of tales to life, in order to help light a path for other newly disabled and chronically ill moms and dads, and to make it clear they are not alone.