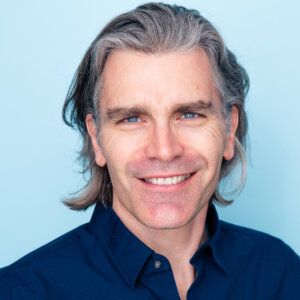 Matt Opatrny is an award-winning playwright, screenwriter, essayist, performer, and teacher of playwriting and devised theatre. He recently wrote eight episodes of DreamWorks Animation’s new pre-K series Not Quite Narwhal (soon to premiere on Netflix), and several episodes of Moonbug Entertainment’s CoComelon Story Time podcast series (out on Spotify). He is currently head writer of Daisy, an independent production of a new science based live-action pre-K series.

Matt is visually impaired due to a degenerative retinal disease. He is currently developing a pre-K animated series with a visually impaired protagonist, and an autobiographical play about his experience with vision loss. He loves to write stories that celebrate differences and show that kindness, compassion, and thoughtfulness are superpowers to aspire to.

As a performer, he has appeared extensively Off-Broadway, regionally, on international tours, and on stage at The Moth storytelling events. He teaches workshops in playwriting, physical theatre, and devising to students across the country (from elementary school to university graduate level), earning a Special Commendation for Distinguished Leadership from the Kennedy Center American College Theatre Festival in 2019. He was a co-founder and Managing Director of Blessed Unrest, an award-winning physical theatre ensemble based in New York City. He is a graduate of Clemson University (Magna Cum Laude) and owes much of who he is to the sea turtles of Costa Rica.