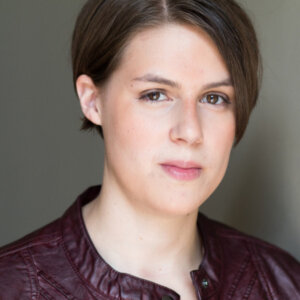 Sarah Fischer grew up in a small, rural, Illinois town, where everyone knew everyone and the most popular club in high school was the Future Farmers of America. Fischer knew early that such a town would not hold her imagination, and so she set off to explore the world, from Costa Rica to Wales, trying to figure out where she was going and what to do when she got there.

After finishing her Master’s degree, she worked as a high school girls’ varsity soccer coach at a Catholic high school, tutored students in English, and worked in artificial intelligence.

Fischer has worked in production and development at OddLot Entertainment, HeyDay Films, the Kennedy/Marshall Company, and USA Network. She’s also worked as an assistant on Marvel’s Agents of SHIELD, Helstrom, and Obi-Wan Kenobi. Currently she is the showrunner’s assistant on Rian Johnson’s Poker Face.

Fischer has advanced in a number of fellowships. She was a semifinalist for NBCUniversal’s Emerging Writers fellowship, a finalist for the Walt Disney Television Writing Program, and a finalist for the Sundance/Sloan fellowship. She was part of the 2019 Writers’ Assistant Network workshop, and has placed in screenplay competitions with the PAGE Awards, Final Draft’s Big Break, Scriptapalooza, ScreenCraft, and the Austin Film Festival. She also wrote the film adaptation for the Image Comics graphic novel series Revival.