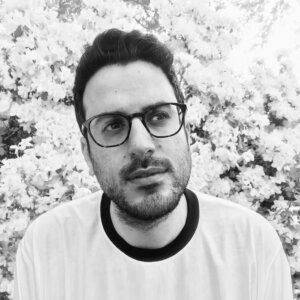 Eden Hadad is an Israeli immigrant and a Yemenite-Libyan writer and director based in Los Angeles. Influenced by his upbringing and his joyful point of view, Hadad is a dark comedy genre-bending filmmaker that cares deeply for his characters’ hearts. After finishing his mandatory military service in 2010, Hadad enrolled at the Sam Spiegel Film School in Jerusalem. Upon graduation in 2015, Hadad received three national grants to complete “The Disposers,” which he directed and co-wrote. Since premiering at the 2016 Raindance Film Festival in London, Hadad’s film has won and played at more than 50 film festivals worldwide, including Santa Barbara, Boston, and Sonoma. The short was later sold to Israel’s most prestigious movie channel, YES5.

Later in 2016, Hadad received a merit-based grant that made it possible for him to attend the MFA Film program in screenwriting & directing at Columbia University in New York, where he has developed his feature scripts and tv projects. In 2021, Hadad directed “The Stunt Double,” a short, serialized narrative podcast produced by Fictionz. In early 2022, Hadad was selected to be part of the inaugural program named 1IN4, which supports disabled creatives.

When he was 12 years old, Hadad was diagnosed as neurodivergent and was prescribed Methylphenidate. The doctors explained that for his brain to feel “normal,” he’ll need to pop a pill every four hours for the rest of his life. Thankfully, Hadad discovered cinema at that same age – which was the only drug he ever needed. A high-school dropout with an MFA diploma from Columbia University, Hadad has been using his “abnormal” brain for writing and directing. Creating characters and worlds that only he can come up with, Eden is using all the mental baggage that he carries from his childhood and his army days so that he can lift the audience with his specific humor and cinematic suspense.