Major Survey Marks Improvement on Jewish Disability Inclusion, with a Gap in Employment and Empowerment: Jews with Disabilities More Than 2X More Likely to Live in Poverty, Despite High Educational Achievement

Survey of 2,321 from Jewish community shows progress from 2018-2021, while identifying areas in need of continued improvement 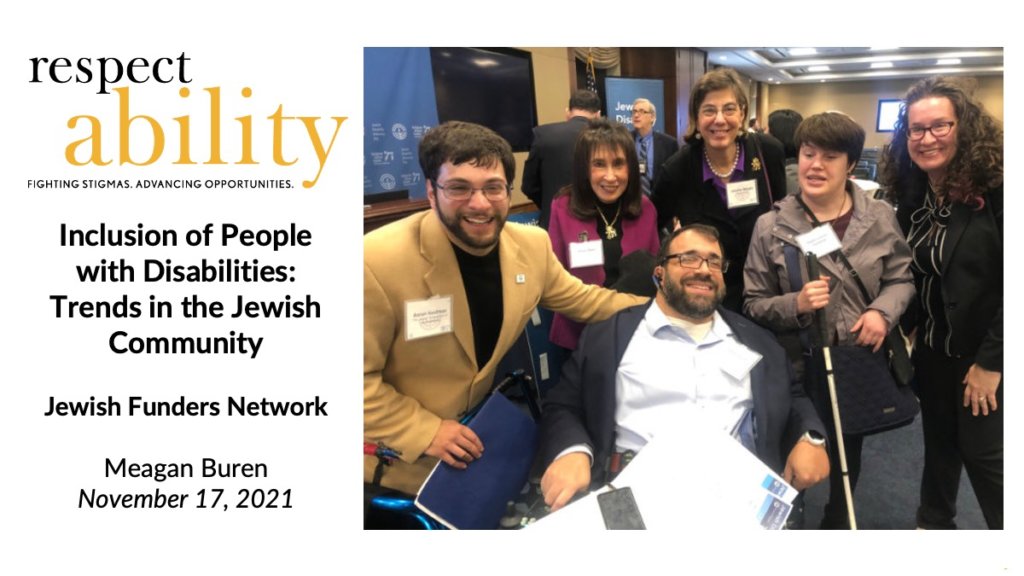 Rockville, Maryland, Nov. 17 – A major new survey of 2,321 Jewish individuals fielded by RespectAbility, a nonprofit organization that fights stigmas and advances opportunities so people with disabilities can participate fully in all aspects of community, demonstrates that Jewish communal organizations are making strong progress toward building a more inclusive community for people with physical, sensory, mental health and other disabilities. At the same time, the survey identified substantially higher poverty rates, as well as a strong desire to work, among this highly educated population.

The new study showed that 65 percent of Jewish respondents felt the Jewish community was “better” at “including people with disabilities” compared to five years ago. Only one percent felt the community was doing “worse.”

“More and more Jewish institutions now understand that we are a stronger community when we are welcoming, diverse, and respect one another,” said RespectAbility Founder Jennifer Laszlo Mizrahi, who is dyslexic, has ADHD and knows what it means to parent a child with multiple disabilities. “However, at the same time, there is a gap where the rubber meets the road as nondisabled Jews feel more has been accomplished in comparison to how Jews with disabilities themselves feel. Indeed, hundreds of Jews with disabilities and their loved ones shared specific and sometimes truly painful examples of when they were unable to participate in Jewish communities due to lack of access and inclusion.”

Mizrahi continued, “The survey findings were very encouraging, demonstrating the Jewish community is headed in the right direction. It’s important to celebrate this memorable improvement, and the hard work of so many people that made it possible, without losing sight of the much more work clearly to be done. It is especially important to note the data shows that even though Jews with disabilities are as highly educated as Jews without disabilities, they are considerably more likely to live in poverty.”

When asked “overall, how well is the Jewish community doing at including people with disabilities in synagogues, Jewish organizations, and communal activities,” encouragingly, 31 percent of respondents answered, “extremely or very well.” This is up 13 percent from 2018 among the total community and 10 percent among people with disabilities. Additionally, 41 percent felt the Jewish community was doing “somewhat well.”

When asked, “in the faith-based institutions and groups that you are active in, do you feel that people with disabilities are included? (i.e. social activities, men’s clubs/sisterhoods, youth groups),” 37 percent answer “yes” with an additional 42 percent responding “sometimes.” The total for inclusion is 79 percent, demonstrating that disability overall in the Jewish community is strong but inconsistent.

“The survey findings were encouraging, showing that the Jewish community is headed in the right direction to be more inclusive of people with disabilities,” commented pollster Meagan Buren who fielded the survey. “Throughout the survey, inclusion numbers were up and ‘don’t know’ responses were down, indicating more communal awareness. However, more work must be done to ensure all members of our community feel respected, included, and valued.”

When asked where the community found the “most access and inclusive environment” and where they found the “most challenges for access and inclusion” of people with disabilities, the largest response was the same for both questions – synagogues. 21 percent said synagogues have the most access while 18 percent said synagogues have the most challenges. This follows multiple efforts to expand inclusion at synagogues and demonstrates the inconsistencies in disability inclusion among varied institutions.

A strong majority of Jewish respondents (57 percent) are involved in faith organizations that have made commitments to “diversity, equity, and inclusion” and among those, fully 88 percent included disability in specifically named areas of diversity. At the same time, the surge in the use of virtual formats in response to the COVID-19 pandemic increased the ability of 73 percent of disabled individuals to access their faith community. This likely resulted from a combination of the relative ease with which more people could be included. For example, live captioning and remote ASL interpreters made it easier for those who are deaf or hard of hearing to participate. Furthermore, the lack of a need for transportation, which remains a major barrier for many with physical, visual, intellectual and/or psychiatric disabilities, enabled additional individuals to participate from home.

While the overall numbers are trending in a positive direction and are strong compared even to three years ago, there still is exclusion in the Jewish community. One in five people with disabilities noted they or another disabled individual in their household have been “turned away from an activity at an organization in your faith community because of its inability or unwillingness to make a reasonable accommodation.”

The professional picture is more varied. RespectAbility’s survey shows that disability representation in Jewish leadership continues to be an area of opportunity. Even though the number of respondents who knew “any clergy or staff with disabilities” at their own institutions increased more than 50 percent, this remains only one in five of the respondents overall. Furthermore, only 15 percent feel that “people with disabilities are encouraged to serve on boards and committees,” with an additional 22 percent responding “sometimes.” 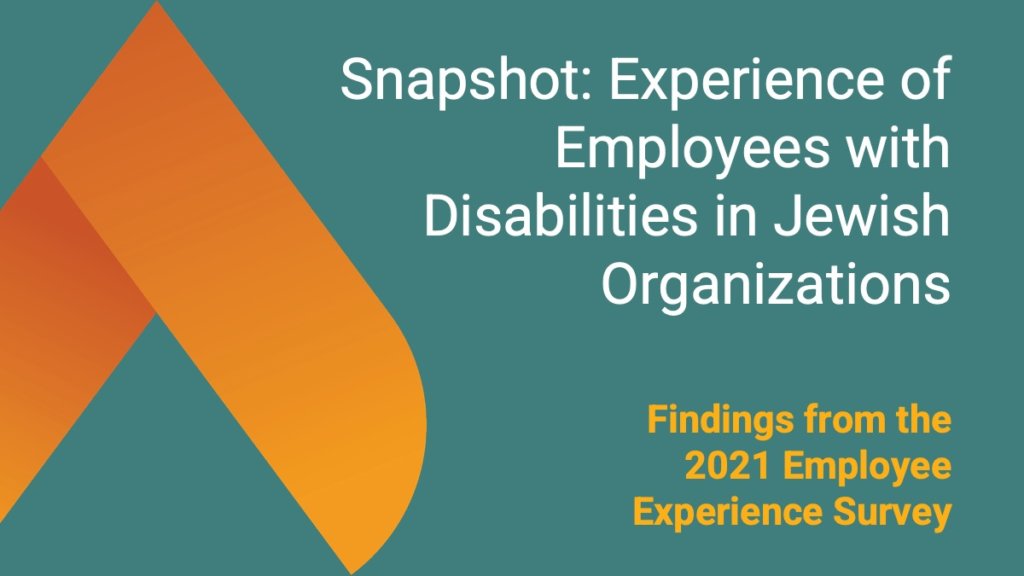 This study is being co-released with new data from Leading Edge’s 2021 Employee Experience Survey, which will be released in full later this season. Leading Edge sought input from RespectAbility when designing questions that captured data about disabilities for the first time in the survey’s history. That study, comprising 11,613 employees of Jewish organizations, found a disability employment rate of more than seven percent, meaning Jewish organizations have reached the employment goal set by the federal government for federal contractors, when the majority of federal contractors have not. The Leading Edge Survey also found that 62 percent of the 853 respondents who identified having a disability were under the age of 39, with more than 30 percent still in their 20s. This means the Jewish sector is a strong employer of young adults with disabilities, which is important to the Jewish community.

“Our tradition always has been pragmatic, emphasizing the importance of Jewish learning, but literally emphasizing that ‘if there is no sustenance, there is no Torah,’” said Matan Koch, a wheelchair user who leads RespectAbility’s Jewish work. “The startling economic numbers, despite the fact that Jews with disabilities are highly educated, demonstrate that work is needed to make sure that Jews with disabilities have the appropriate opportunities and supports in the workplace, bringing sustenance and security. This is clearly well known to our population.”

The RespectAbility study showed that 32 percent of community respondents believe that “prejudice and unacknowledged stigma” remains the biggest barrier to full inclusion, just as it was in 2018, at 32 percent. “Don’t know how” came in at nearly 20 percent which shows a real need for training. While this finding was primarily in relation to synagogue inclusion, the more complicated question of employment would likely trend the same way. Indeed, the Leading Edge study showed gaps in levels of responsibility and income for employees with disabilities at Jewish organization, so continued training and focus is needed. 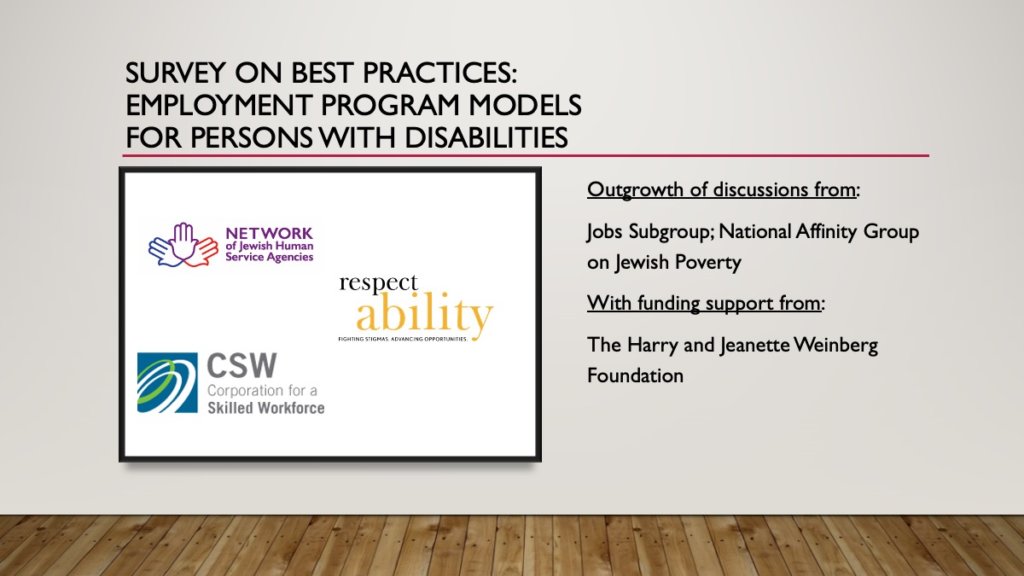 Given the new data, it is especially exciting that the Network of Jewish Human Service Agencies (NJHSA) is also just completing a survey on successful employment programs for people with disabilities in the Jewish Social Service realm and beyond.

The RespectAbility, Leading Edge and NJHSA studies were discussed at a virtual panel hosted by the Jewish Funders Network.

Previous: Jewish Funders Network – Unprecedented New Findings on Jews with Disabilities: What Does It Mean for the Future?

Next: Building an Equitable Recovery: RespectAbility Advises Indiana on Solutions for People with Disabilities