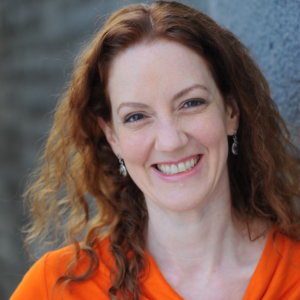 Sarah Granger is a writer and producer drawn to stories of misunderstood people seeking connection – to one another and the world around them. The daughter of a paralyzed polio survivor, Sarah learned at a young age the importance of accessibility and adaptability. Originally from Kansas City, she studied playwriting, and screenwriting at the University of Michigan before heading to California, where she built a career in tech and digital media.

In 2006, Sarah sustained pelvic nerve damage while delivering her daughter, leading to permanent neuralgia — and a pivot to writing — first as a journalist and author, then as a screenwriter. Her feature, THE PAIN-FREE DAY, won the 2022 SFFILM Rainin Grant for Filmmakers with Disabilities and was on The Black List’s 2020 Disability List, co-curated by the WGA Writers with Disabilities Committee. She participated in the 2021 RespectAbility Entertainment Lab and 2022 Stowe Story Lab. She is also credited with writing, directing and co-producing what was likely the world’s first cyberpunk stage play.

As a producer, Sarah strives to amplify underrepresented voices and include at least one character with a visible or invisible disability in narrative projects. She is an associate producer on three short films and an executive producer on one short and one micro budget feature, STAY WITH ME, exploring how young adults cope with mental illness. Sarah has also worked with advocacy organizations on issues related to technology accessibility, ergonomics, and adaptive design.

Sarah’s bestselling nonfiction book, The Digital Mystique, was published by Seal Press and her articles have been published in The Huffington Post, LA Weekly, Slate, Inverse, and SFGate. Her work has been translated into multiple languages, read by millions of readers around the world and she has been credentialed press at The White House and major awards events. She has been a featured speaker at South by Southwest, the California Leadership Forum, the Ability in Tech Summit, and the Writing for Hollywood Summit. She has also been a guest on Good Morning America, CBS, NBC, and NPR.