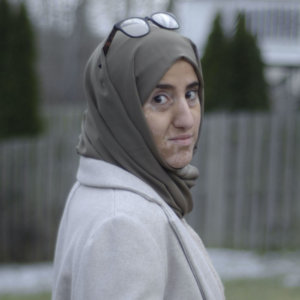 Alaa Zabara is a Hard-of-Hearing Yemeni-American Director and Cinematographer. Drawn to the power of photographs from an early age, she started to document the daily life around her through the use of a camera. These documentations became her conversation with, and introduction to, the world. She became attracted by the ability of cinema to change the hearts and minds of an audience, highlight the stories that need to be told, and to amplify the voices of the voiceless.

Her approach in telling stories is, through vision, to challenge herself in telling stories that come from personal experience and have a representation of what is usually untold or hidden. She expresses her take on the world creatively, insightfully, and humanely. She likes to play with perception and nudge the audience that they are watching something established by an Arab Hard-of-Hearing woman. Rather than trying to surprise the audience, she strives to unveil potential connections to the characters or the story, creating a new view of their own lives. She wants them to relate to her not as a filmmaker but as a human, filling the distance that comes between each of us.

Her latest short film “Selahy” was Selected for Competition Shorts in Bentonville Film Festival & HollyShorts, primarily focusing on deaf/hard-of-hearing story living in a war zone. She recently finished a project that was selected to present a work of nonfiction for the Arab American National Museum 2021 (AANM). Alaa was one of the participants for its third annual RespectAbility Lab for Entertainment Professionals with Disabilities. She also recently finished the Minorities in Film (MiFIM) branded Lab to demystify the process of working in the commercial industry and was a Semi-Finalists for the Paxeros 2020 inaugural WCCDP to direct a spot for Subaru. You can check more of her work at www.alaazabara.com.