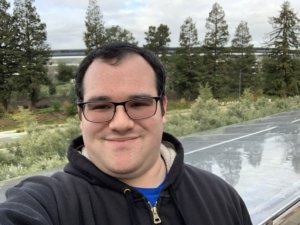 Eric Ascher is one of the most interesting young leaders in America. He’s a fountain of knowledge around two key passions – live television talent contests and innovations in technology. It’s like he’s always looking for the best in man and in machines.

On busy days Ascher can put out 50 press releases – one customized for each state – while filling social media with interesting content for RespectAbility’s 60,000+ followers. As such, he’s a conversation starter and agenda setter.

Ascher also traveled to Iowa twice during the 2020 presidential primary campaign, meeting with candidates to ensure they keep people with disabilities – and policies important to the one-in-four adults in America who have a disability – in mind. 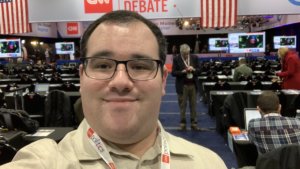 Eric Ascher in the spin room at the CNN Democratic Debate in Des Moines, IA

Ascher graduated from Goucher College in May 2016 as a communications major and political science minor. He initially joined RespectAbility as a Communications Fellow in the Spring 2018 cohort. He was drawn to RespectAbility because, being on the autism spectrum himself, he knows that people with disabilities are capable of doing great work, just like everyone else.

Previous: What Do You Pray For?