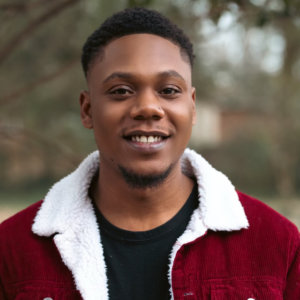 Los Angeles, CA, January 12 – RespectAbility’s newest hire Jacquill Moss joins our growing Entertainment team in a newly created position of Entertainment Media Program Coordinator, where he will assist in tracking and coordinating the growing training and consulting requests that come in to the department.

“It’s a blessing to be able to grow, learn and develop new skills while being able to utilize my best qualities,” Moss said.

After being selected through RespectAbility as one of 10 participants of the WarnerMedia Access Early Career Bootcamp in 2021, Moss was recruited for the Entertainment Media Program Coordinator position.

“The WarnerMedia Access Early Career Bootcamp provided much-needed insight on the different paths you could take in the industry, which helped a lot to identify what would work best for my strengths and interests,” said Moss. “The Bootcamp helped me prepare for this role by providing exposure to how these kinds of programs are organized and executed. Organizing similar programs for other people with disabilities is going to be an exciting part of my work at RespectAbility.”

Born with nocturnal epilepsy, this position not only aligned with Moss’ diverse skillset but also his lived disability experience, passion for advocacy and evolving the narrative. Outside of RespectAbility, Moss works on bringing awareness to unhoused youth, mental health, and foster children to support those in need.

A huge fan of all aspects of cinema, Moss also has volunteered yearly at the Sundance Film Festival and has worked with many high-profile brands and clients while serving as a freelance videographer.

“My experience at Sundance was eye-opening, inspirational, and productive,” said Moss. “I started my first two years as a theatre crew volunteer for Prospector Team C. I worked night shifts and spent most of my days attending panels, Q&A’s, workshops, and live music venues. In my third year, I was the Ballot Lead, which was a great opportunity to lead a team and develop new skills.”

Moss will be able to continue his relations with Sundance as a member of RespectAbility, which is part of Sundance Institute’s Allied Organization Initiative.

“Our Entertainment and News Media team continues to grow, and we’re very excited that Jacquill Moss is our newest addition,” said Lauren Appelbaum, Vice President of Entertainment and News Media at RespectAbility. “Last year, our team was involved in more than 200 television episodes and films. As the requests continue to increase from major studios and independent filmmakers alike, we realized we needed to bring on a coordinator to assist this department. Moss has not only the skills but also the drive needed to be a major asset to our work in Hollywood and beyond.”

Mary McGill Lucas lives in Charlotte, North Carolina and graduated from the College of Charleston’s REACH Program in 2016 with a certificate in Women and Gender Studies. They pride themselves on authenticity and living intentionally.