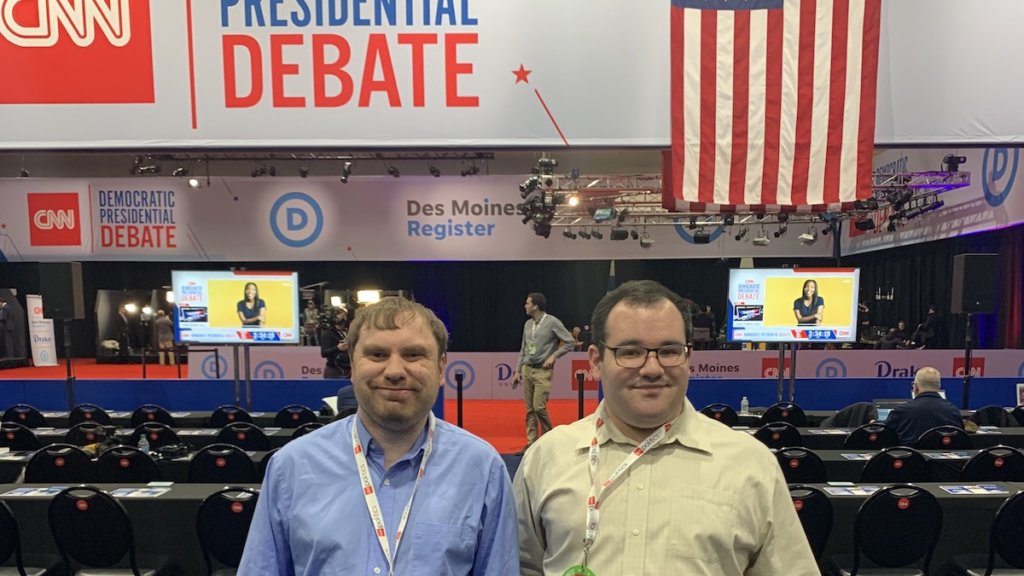 Eric Ascher and James Trout, both on the Autism spectrum, and Ila Eckhoff, who has cerebral palsy, are ensuring that the presidential candidates do not forget the one-in-four adults in America who have a disability by reporting on the campaigns’ efforts for The RespectAbility Report, an online publication at the intersection of U.S. politics and disability. 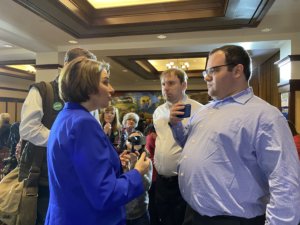 Eric Ascher and James Trout, who are both on the Autism spectrum, interviewed several candidates while in Iowa, including Sen. Amy Klobuchar (pictured above). This is Trout’s second campaign season doing so.

Ascher is the Communications Associate of RespectAbility, a nonprofit organization that fights stigmas and advances opportunities so people with disabilities can participate fully in all aspects of community. Ascher’s motivation for engaging the candidates is not only professional but also personal:

“I know firsthand how hard it is for qualified people with disabilities to find jobs. I spent two years after college looking for work. I honestly believe that stigma around disability played a major role in that fact. What candidates say can make a huge difference in the stigma people with disabilities face, and I am thrilled to be in Iowa so I can help them know how they can be good allies to the disability community.”

Last cycle most of the campaign websites and events were not accessible to people with disabilities. However, due to Ascher offering free trainings and holding campaigns accountable, many of the campaigns this cycle are nothing like they were four years ago, in terms of accessibility.

James Trout is a former Policy Fellow with RespectAbility. It is his second presidential cycle working with the organization and he has noticed a big increase in event accessibility from four years ago. This cycle, most of the campaigns are mostly accessible. This means that people with disabilities can truly participate in town halls and civic engagement in the presidential campaign across the board for the first time. Additionally, for the first time, most of the leading candidates have disability advisors – and they are people who actually have disabilities themselves.

Per Trout: “Persons with disabilities are the largest minority in this country. It is important that they are able to speak on behalf of themselves and others with disabilities. We must not reinforce the outdated notion that we are either victims or helpless. By participating in the presidential process, I hope to help enforce the message that people with disabilities become adults and deserve to be part of mainstream society.” 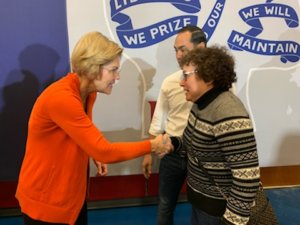 Ila Eckhoff, who has cerebral palsy, spoke with several candidates while in Iowa, including Sen. Elizabeth Warren (pictured above). She spoke about the importance of ensuring opportunities for people with disabilities.

Eckhoff, who serves on RespectAbility’s board of directors, adds: “Disability impacts 20 percent of the population. We are the minority that anyone can join at anytime. We are here in Iowa to encourage candidates to engage in a conversation about disability. We need to change the dialogue around disability to be about ‘what we can do’ assuming competence. People with visible and nonvisible disabilities represent an enormous underemployed talent pool. There is significant research proving that diverse teams, including those with disabilities, create better economic results for the companies that employ them.”

So far, the team has covered campaign events including Vice President Joe Biden, Sen. Bernie Sanders and Sen. Elizabeth Warren; asked pointed questions of Mayor Pete Buttigieg, Sen. Amy Klobuchar and businessman Andrew Yang; visited campaign offices in the Des Moines area; and met with policy advisors for many of the campaigns including the Sanders and Yang campaigns. They will be covering more events for The RespectAbility Report, which has an email circulation of more than 100,000 subscribers, this week as well. Ascher and Trout also will be covering the Democratic presidential primary debate as disabled journalists Tuesday evening. 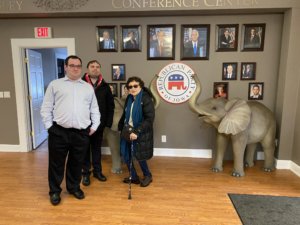 RespectAbility team members have briefed the 11 campaigns in depth on a wide range of issues for the organization’s disability voter candidate questionnaire . This included a deep look around intersectional issues where race and immigration intersects with disability. The candidate plans reflect that they understand the seriousness of these issues and are ready to act. While not all of the campaigns have submitted their questionnaires yet, five have done so already: Mayor Pete Buttigieg, Sen. Amy Klobuchar, Sen. Bernie Sanders, Sen. Elizabeth Warren, and Andrew Yang. All responses from both sides of the aisle will be posted in full on The RespectAbility Report as they come in and be used to produce nonpartisan voter guides in all 50 states.

All content is edited by Lauren Appelbaum, former political researcher for NBC News. As an individual with an acquired nonvisible disability – Reflex Sympathetic Dystrophy – she writes about the intersection of disability, employment, Hollywood and politics.

RespectAbility is nonpartisan and does not rate or endorse candidates. The questionnaire is purely for educational purposes. View more coverage of 2020 presidential candidates.

Next: Webinar: How to Ensure Legal Rights and Compliance Obligations