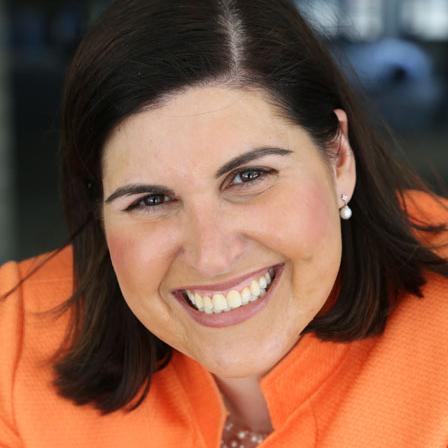 Lauren Appelbaum (she/her) is the Senior Vice President, Communications and Entertainment & News Media, at RespectAbility, a diverse, disability-led nonprofit that works to create systemic change in how society views and values people with disabilities, and that advances policies and practices that empower disabled people to have a better future. She brings more than 15 years of experience in strategic and crisis communications, writing, video and web production, news gathering and social media to the disability agenda. Previously she served as a digital researcher with the NBC News political unit for the 2006 midterm and 2008 presidential elections with Chuck Todd and Andrea Mitchell.

As an individual with an acquired nonvisible disability – Reflex Sympathetic Dystrophy – she works at the intersection of disability, employment, Hollywood, and politics. From entertainment professionals to presidential campaigns, journalists to philanthropists, she conducts trainings on the why and how to be more inclusive and accessible.

Appelbaum also increases hiring initiatives of people with disabilities behind the camera and enriches the pool of disabled talent in Hollywood by connecting them to those who can assist with their careers, both on the creative and business sides of the industry. She is the author of The Hollywood Disability Inclusion Toolkit, which was created to help entertainment professionals to be as inclusive of people with disabilities as possible, and the creator of an innovative Lab Program for entertainment professionals with disabilities working in development, production and post-production. She is a recipient of the 2020 Roddenberry Foundation Impact Award for this Lab.

Appelbaum is a sought-after expert and has been quoted by many national publications including Associated Press, Deadline, The Hollywood Reporter, IndieWire, The Los Angeles Jewish Journal, The New York Times, RealScreen, Reuters, Tablet, USA Today, Variety and The Washington Post. She has spoken on panels at the Association of Health Care Journalists Conference, ComNet, RealScreen Summit, Sundance Film Festival and SXSW, among others.

Appelbaum also is the Managing Editor of The RespectAbility Report, a publication at the intersection of disability and politics. During the 2016 election season, Appelbaum led a team of Communications Fellows in interviewing all of the presidential candidates about the importance of disability employment, reporting all interviews via accessible video and articles in The RespectAbility Report.

Born and raised in the Philadelphia area, Appelbaum has a master’s degree in Broadcast Journalism from Syracuse University; she also has undergraduate degrees from Columbia University and the Jewish Theological Seminary. She serves on several national and local nonprofit boards. Appelbaum currently lives in Maryland with her husband, daughter, and dog. She travels nationally, often to the Los Angeles area.

Reach Appelbaum at [email protected] or on Twitter @laurenappelbaum.