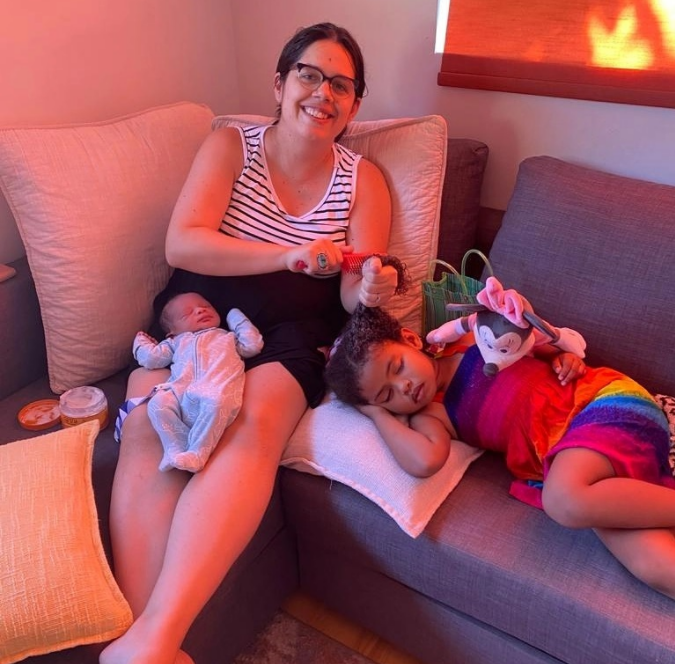 Joy St. Juste with her children

Los Angeles, CA, March 4 – A third-generation Los Angeles native, RespectAbility’s new Marketing and Communications Director Joy St. Juste began her career as a freelance journalist after graduating from Arizona State University. However, after facing a rut in her life, she made a leap of faith and took a job at the English language newspaper, The Guadalajara Reporter. Her time in Mexico was integral to connecting to her roots and key aspects of her identity. I asked her if she connects her Latinidad to her gender in any way:

“There is definitely a throughline there…In connecting with your ancestors.” St. Juste replied. “When I meditate, I never see a man. It’s always like my grandma and my great grandma there, you know? And it’s interesting being a mother of a boy and a girl… Having my daughter, I definitely feel that through line.”

St. Juste explains that being diagnosed with ADHD heavily plays into womanhood in a myriad of ways. She was not diagnosed until she was 37 and this presented its own unique challenges:

“I wasn’t diagnosed until I had my daughter and that plays into gender because of how ADHD is diagnosed in women. It presents differently. There are different expectations for women [in society], on how you’re going to behave, and on how you’re going to learn. And you’re already expected to be someone who’s going to sit still and to follow the rules and to always be perfect. So, it was just really mind-blowing to see that there’s this whole other way of seeing this disability, or, this brain functionality and how that manifests differently by gender. And seeing it had such a profound effect on my life. You know, I spent 37 years not knowing that my brain worked differently than the neurotypical brain and that plays into every single aspect of being.”

She explains how ADHD permeates almost every area of her life: “Like relationships. Jobs. Self-worth. Would I have been so impulsive to do x y, or z? Or date this person if I knew what was going on in my brain, you know? So yeah, that’s definitely where I see it [ADHD] all tying in.”

In some ways her disability is a unique strength, especially in motherhood. St. Juste says she can get on her children’s “level” and relate to them if they’re feeling frustrated. Or, for example, she’s exceptional at making up stories if they’re bored. Considering the high standards we place on mothers, in today’s world, St. Juste acknowledges that her ADHD doesn’t always mean that the house is perfectly clean or that the tortillas aren’t being burnt, but she believes that her neurodivergence allows her to be creative and empathetic.

This serves her in her professional life as well: “I think it helps me as an ally…in social justice. I think people… who are neurodivergent, are very empathetic and since we’ve spent a lot of our life being misunderstood or trying to be placed in some kind of box. That level of empathy makes us really good allies, and able to advocate in social justice.” Gender, similarly, has given her a unique perspective in her career by “finding different stories and different angles… coloring outside of the lines” so to speak.

For St. Juste, a major part of her career journey has also involved self-care, including taking a job at RespectAbility: “Actually, this job in this organization is a big part of my self-care. It was removing myself from a situation where I had to mask.“ St. Juste explains that sometimes projecting the conventional image of what seems “Type A,” or traditionally professional, can be exhausting. “Really being at an organization where you can feel like you’re being yourself…. I don’t think people realize how much energy that can give you.”

I asked St. Juste how motherhood intersects with disability, and she shares that it has been a journey all on its own:

“I didn’t know that there’s this concept called matrescence, which is basically the change from pre-motherhood to being a mother…shedding an old identity for a new one. And I didn’t know how much postpartum was going to hit me. With my daughter, I was super anxious, and I didn’t know I had ADHD. When you spend your first couple days in the hospital after giving birth, the nurses want you to write down every single detail — what time the baby poops, how much he eats, etc. And I just remember going to my doctor, being like, I’m not going to do this. I was just trying to keep up and feeling like I couldn’t…And then you see these other moms and you’re like, ‘What am I doing wrong? Their house is all clean. They have everything all set up. And it just looks really hard.’”

“I lasted one day of pumping at work before I said ‘No, I’m done.’ Then, I realized I had ADHD. I realized there’s no way I’m going to keep track of all of these breast pump flanges and pee and poop spreadsheets. Then I became aware of it and got to know myself as someone with a disability…Then my son was born, and I was fully aware…The nurse came in and she said, ‘Okay now, here’s a piece of paper…’and I was like ‘Listen, I have ADHD, I’m going to lose this every time you bring it to me. If you want to know details, I’m going to put them in this app.”

St. Juste explains that there was a bit of back and forth with the accommodation she requested but she was ultimately right because she is the one who knows her needs best. With her second child, not only did she learn to advocate for herself in the medical space, but she had a chance to heal. “And my postpartum time with my son… I’m feeling emotional right now…because I didn’t have all that weight on me thinking that there was something wrong with me, you know? That need of doing this specific thing at this specific time. It was still a stressful time, but I was able to just be with him and that’s really empowering. And that’s how much having a diagnosis, as a woman, means.”

It can be difficult to manage the expectations of being the perfect partner and mother in a neurotypical world where standards are set so high and St. Juste captured this feeling well:

“A good majority of the time a woman is taking on the mental load of [everything]. You know, what size socks are the kids now… And do we have enough diapers left? And all of those things that for someone who has cognitive or executive dysfunction can be overwhelming.  So, knowing your brain gives you such a sense of freedom.  I just remember looking at my son and having this pure sense of ‘Oh, I can just enjoy being with you because I don’t care about meeting these expectations anymore.’ …There’s a certain amount of grief. Because I lost my chance on all these things, but having my second child was healing in a way for all of that.”

On the subject of grief, I asked St. Juste what advice she would give to her younger self? “I wish I could have had a diagnosis in some way, but the thing that I come back to is ‘You’re not lazy…Your brain is thinking in a different way…just keep doing you and you’ll find your way.’ Because that’s what I’ve always done.’” St. Juste has definitely lived by that and explains how her unique way of thinking led her to pursue a new career in Mexico against all odds and push against the grain. “Society is telling you things are supposed to be one way. You can keep questioning that and make your own way.”

While the month of March is traditionally recognized as Women’s History Month, RespectAbility is using this moment to amplify the voices of all underrepresented genders in the Disability community, with a month-long editorial series titled, “Empowering the Next Generation,” acknowledging the important role each of these voices plays in the overall goal of building gender equity and equality for future generations. Stay tuned for more pieces all month!

Previous: In case you missed it… JDAIM Events in Review (Part 3)

Next: Just Like You: Anxiety and Depression Is a Refreshing Film Breaking Mental Health Stigmas and Empowering Anxious Teens