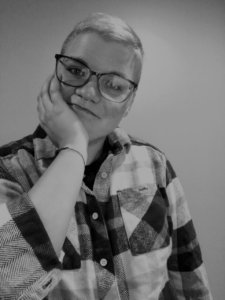 Amanda Burdine is originally from Indiana where she grew up writing novels in her free time. This interest changed to screenwriting when she realized she already was envisioning her novels as films and made the logical leap. She received her MFA in Writing for Stage and Screen from New Hampshire Institute of Art in 2017. There, she explored and refined her passion for writing about mental illness, LGBT issues, death, dark humor and the supernatural all while coping with the sudden death of her mother and her boyfriend’s heroin addiction. Since then she has been involved with Female Eye Film Festival’s Script Development program in 2018 for her screenplay ​Barnabas is Dead,​ which won Best Low Budget Indie. In 2019 she was a Fellow for Middlebury Script Lab for her screenplay ​Dead Dad​.

Her life has taken a strange turn in 2020. Her husband, who struggled with substance abuse and untreated mental health issues through their relationship, died from an overdose in February. She currently is spending time with friends and family kind enough to let her and her two dogs crash with them while she seeks employment and focuses on grieving and managing her mental illnesses. She lives with chronic depression, anxiety, and borderline personality disorder, a widely stigmatized and misunderstood personality disorder that makes it hard for her to understand appropriate emotional responses and regulate her emotions. Through her stories, Burdine hopes to destigmatize and create a better understanding of mental illness.