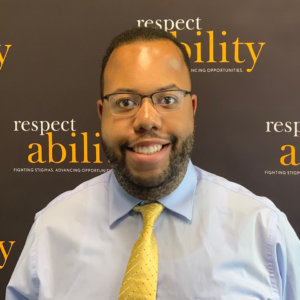 Anthony Rendolph Clarke Brown II was a Communications Apprentice at RespectAbility. RespectAbility is a nonprofit organization fighting stigmas and advancing opportunities for people with disabilities. Brown was born with hydrocephalus, excess fluid in the brain, and a slight form of cerebral palsy. He developed mild seizures later in life. Disability advocacy became an avenue he wanted to explore after going to a resume and cover letter workshop and speaking with Nancy Forsythe, the Career Development Disabilities Specialist for the University of Maryland. She referred him to RespectAbility and their Apprenticeship program.

Brown graduated from the University of Maryland College Park with a bachelor’s degree in English language and literature in December 2018.

Sports writing became a passion of Brown’s when he joined Bishop McNamara High School’s newspaper as a sports staff writer in his junior year (2010). The next year, he went onto become one of the sports editors. When he joined the newspaper staff at Prince George’s Community College in 2012, he held the managing editor position the semester before transferring to the University of Maryland in 2014.

He currently writes recruiting profiles for football and basketball athletes in high schools and junior colleges across the United States for PorterMedium.com. This is work he has continued to pursue with the new site after a three-year stint writing for the Sports Rants and Dimoro Sports sites housed under Elite Rank Media.

At the start of his tenure at Maryland, he was recruited to join FanSided Network’s The Baltimore Wire blog covering Terps football and basketball. He continues to write for the network, where he primarily covers Terps basketball for its Busting Brackets college basketball site.

Prior to those roles, he wrote for the Maryland Terrapins and Washington Redskins SB Nation sites’ Testudo Times and Hogs Haven, respectively.

Last summer, Brown interned for the Voice of America’s Africa Division, where he gained valuable video editing skills. He worked with Dalet Plus, multimedia editing software, to create B-roll packages for the daily edition of Africa 54. He also ran the teleprompter and live streaming for the show and tracked voice-overs for its packages.

Brown wrote several pieces during the 2019 Summer and Fall Apprenticeships. Read them on our website:

Anthony Brown currently writes recruiting profiles for athletes in high schools and junior colleges across the United States for PorterMedium.com. He graduated from the University of Maryland College Park with a bachelor’s degree in English language and literature.