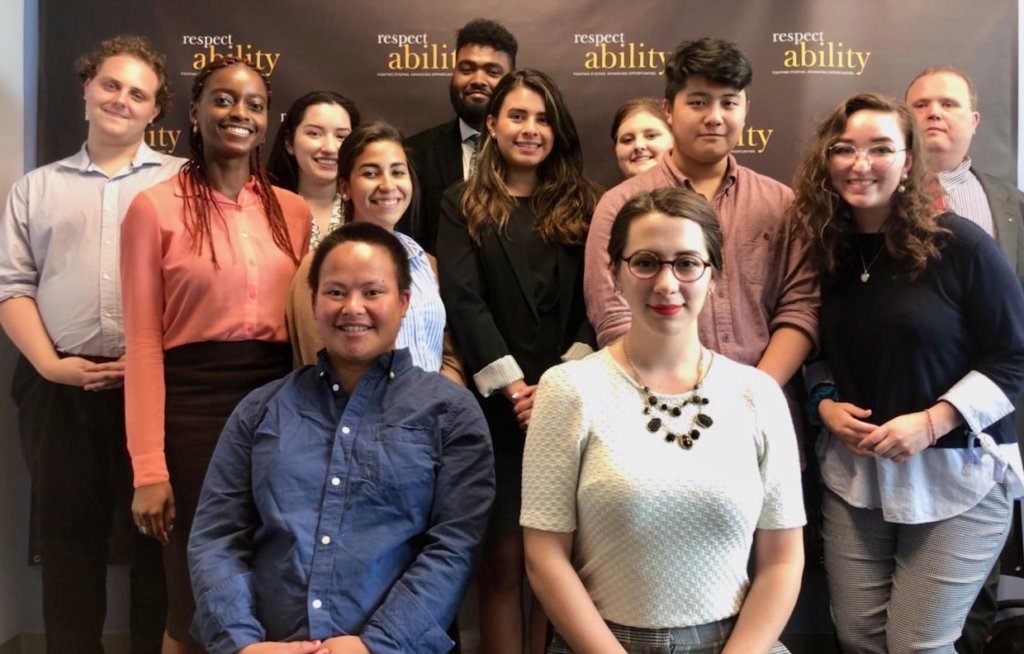 Rockville, Md., July 16 – “There’s power and value in disability, and power and value in working with disability, ” said Gary C. Norman, an attorney, a convener and a public man with a dog partner, whom RespectAbility Fellows welcomed for a lunch time conversation. He mentioned the idea of ancient Rome and their concept of the private man (now woman) and public leader, and his role in this as a person partnered with a service animal. Whether working on disputes regarding service dogs, or working in the nonprofit sector, or meeting with large institutions, such as NATO, Norman believes that, if you want to advance inclusion, then find a niche you care about and create impact.

Medical professionals diagnosed Norman at a young age as legally blind. A range of allies, including his father, advocated for him throughout his early school years, and taught Norman how to advocate for himself. Norman graduated from Wright State University in Dayton, Ohio.

A RespectAbility Fellow asked, “Did you get treated differently when you tried to get your JD?” Norman attended Cleveland-Marshall College of Law experiencing a “rocky road” regarding accommodations at instances. He thusly smiled responding: yes. He was on the cusp of job accessibility and technology, so it was harder for him to get the accommodations than it is for a student now. Norman explained the resistance at his law school when he would bring his recorder to class. He eventually went to the Dean of the school and demanded the accommodations he deserved by law.

Norman has been partnered with a guide dog since August 2001. Recently, there have been debates on service animals at airports, something Norman needs because of his disability. When asked if he gets frustrated explaining his guide dog to others, he said that he struggles with this a lot “but it brings an opportunity for education.”

“In a positive way [education] is a worthy challenge,” he continued. “If I can educate them in a positive way, maybe that makes a door open for someone else.”

Work at a non-profit law firm, as he called it, shaped Norman’s impressions of the role of the legal field in improving lives and in the role of the lawyer as public servant. The summer after his first year of law school, and then the summers through law school, he worked for a nonprofit named Cleveland Works, Inc. There, he shadowed the Executive Director, working on various elements of anti-poverty law, including advocating with the staff for Senator DeWine as well as working in the legal clinic on such matters as criminal records expungement, housing, and on his first disability related case. Norman enjoyed this work as a law school student.

Through the prestigious American Marshall Memorial Fellowship Program, hosted by the German Marshall Fund of the United States, Norman widened his knowledge in Trans-Atlantic relations, including European governments. He has been one of few people with a disability to travel through the program. He attended meetings on, among other concerns, disability, healthcare and poverty, as well as on history and ancient societies. Throughout his time in Europe, Norman also realized how difficult it could be to navigate the city with vision loss. As a blind traveler, Braille helps Norman navigate, along with specific apps on his phone that help people with vision loss. He is already making a mark on the future of disability, including through his public policy dialogue work.

The Future of Inclusion

A Fellow asked Norman “As a person working in policy, what would you like to see in five years for inclusion?” Norman answered by talking about the future of technology first. He would like to ensure that the emersion of robots or other forms of new tech will build inclusion, not further divide humanity. He also would like to see more progress for African Americans, and hopes that technology and healthcare could be leveraged to help elderly people with disabilities. Norman also made clear that, while he would like to see these issues progress, “institutions are great but only as good as the people working for them.” Norman believes that Americans need a new generation of leaders with and without disabilities stewarding this great republic.

Some areas that Norman feels need more inclusion for people with disabilities are “economic empowerment, disability business owners, community integration and health care access.” Norman’s advice for anyone interested in disability law is to “find something you know, or something you care about, and try to find an area where you can build a niche and create an impact.” Norman is a prime example of the talent of people with disabilities, and the progress they are making in the legal field.

RespectAbility is a nonprofit organization fighting stigmas and advancing opportunities for and with people with disabilities. This summer, 11 Fellows had the opportunity to learn from a variety of guest speakers. Learn more about the National Leadership Program and apply for the next cohort! Contact [email protected] for more information.

Next: Born This Way’s Emmy Nominations Prove Disability is a Winning Theme