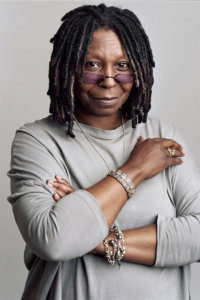 Deloris in Sister Act, Whoopi on The View, Shenzi the Hyena in The Lion King—many of us can connect at least one character in a favorite show or movie with Whoopi Goldberg. Not as many can recognize her as a person with dyslexia. Dyslexia is a general term for disorders that involves difficulty in learning to read or interpret words, letters, and other symbols, but does not affect general intelligence. Indeed, singer and activist Harry Belafonte, Shark Tank star and businessman Daymond John and businessman Richard Branson all have dyslexia like Goldberg.

Goldberg is recognized widely for her work. She is one of few people to win an Emmy, a Grammy, an Oscar and a Tony award. However, as a child, Goldberg constantly faced negative feedback. People used to think she was lazy or not trying. She dropped out of school by age 17 and continued her education by going to museums and public lectures, according to the Child Mind Institute.

“What I remember about being a kid was that I felt pretty protected, I wasn’t afraid, and I had a mother who understood after a while that there was something different about the way I learn,” Goldberg recalls in talking with the Child Mind Institute.

One thing that remains about Goldberg is her creative mind, which she tapped into despite not being able to read as easily as others. Her favorite part of school would be story time, where she could listen to the teacher read and picture everything in her head.

Reading scripts and writing books as often as Goldberg does was hard at first with her dyslexia. Like she did in elementary school, Goldberg found it easiest to have someone read to her so she could memorize the lines for her scripts. For her books, she dictates instead of writing before sitting down with an editor to adjust the language.

Role models such as Goldberg make a big difference in setting high expectations for youth with disabilities. People with disabilities of all backgrounds can be amongst the highest achievers on earth. Harriet Tubman had Epilepsy, actress Halle Berry lives with diabetes, business leader and Shark Tank superstar Daymond John is dyslexic and Stevie Wonder is blind. Each of them is a positive role model for success.

Our nation’s economy is strongest when it is inclusive of the value that diverse talent brings to the workplace. Goldberg is defying statistics as one of the highest paid actresses in Hollywood and a superstar TV host. She has indicated that her career will not be slowing down anytime soon.

“The advantage is that my brain sees and puts information in my head differently, more interestingly than if I saw like everyone else,” said Goldberg.

Previous: Halle Berry: Living with Disability While Taking a Stand against Domestic Violence