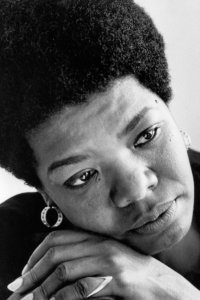 Angelou was born April 4, 1928 in St. Louis, Missouri. She began her career as a performer in the 1950’s after receiving a scholarship to the California Labor School where she studied dance and acting. She performed in many Broadway productions in her early career. She eventually branched out into writing poetry as well as autobiographical books. Some of her most notable poems include Phenomenal Woman and Caged Bird. One of her most popular books, “I Know Why the Caged Bird Sings,” details her own life experiences of growing up in America during segregation and Jim Crow. Angelou also directed, wrote, produced and starred in various films and television shows. She is credited for writing the screenplay for the 1970’s film, Georgia, Georgia.

Angelou continues to influence past and current generations with her variety of works. She has taught many, specifically women, that confidence and being comfortable in your own skin no matter what your background is can take you far. She was truly a remarkably phenomenal women herself. Her works remain legendary and uniquely relatable to the everyday lives of men, women and children across the globe.

Malcolm Gladwell’s book, David and Goliath: Underdogs, Misfits, and the Art of Battling Giants focuses on how trauma or living with disability can cause people to develop exceptional innovation, creativity and coping skills. Clearly Angelu had such skills.

People with disabilities of all backgrounds can be amongst the highest achievers on earth. Harriet Tubman had Epilepsy, actress Halle Berry lives with diabetes, business leader and Shark Tank superstar Daymond John is dyslexic and Stevie Wonder is blind. Each of them, like Angelou, is a positive role model for success.

Next: Actress with Cerebral Palsy Diana Elizabeth Jordan is Veteran of 40 Shows, Shorts and Movies