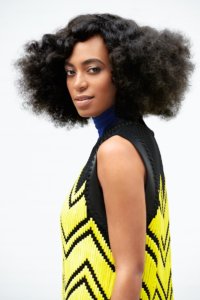 When it comes to the traditional expectations of a pop star in Hollywood, Solange Knowles shatters the glass ceiling as a woman of color who also happens to be diagnosed with a disability that affects 10 percent of the U.S. population: ADHD. Knowles has been outspoken about her ADHD, educating people about her disability.

Through her impressive resume that includes music, art, dance and acting, Knowles is recognized as an elite in her industry. As a Soul Train Award recipient, an honoree at Glamour’s Women of the Year 2017 Awards, and, of course, holding a Grammy which celebrates her debut album “A Seat at the Table,” Knowles shares a positive portrayal of women of color in the art scene. It is no secret that Knowles is a powerhouse through her unique artistry.

“I was diagnosed with ADHD twice,” Knowles said. “I didn’t believe the first doctor who told me, and I had a whole theory that ADHD was just something they invented to make you pay for medicine, but then the second doctor told me I had it.”

ADHD, or Attention Deficient Hyperactive Disorder, can affect basic functioning due to hyperactivity and a pattern of inattention. 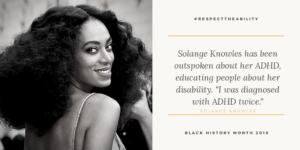 “I was diagnosed with ADHD twice.” – Solange Knowles

Knowles recognized her disability after the second diagnosis and even admits the normality of ADHD symptoms in Hollywood and how “the symptoms seem to apply to everyone around me in the industry. Loss of memory, starting something and not finishing it…”

For many of the 1,107,606 black students with disabilities in America today, however, the deck is stacked against them. Frequently “invisible disabilities” such as ADHD are not diagnosed and students do not get the supports they need to achieve. Frustrated, they can act out and become suspended. Studies show that when students miss too many days, they get so far behind in class that it can lead to them dropping out of school and entering the school-to-prison pipeline. Today there are more than 750,000 people with disabilities behind bars in America. Indeed, half of all women who are incarcerated in America have a disability. The majority of them do not have high school diplomas, are functionally illiterate and are people of color.

Role models such as Knowles make a big difference in setting high expectations for youth with disabilities. People with disabilities of all backgrounds can be amongst the highest achievers on earth. Harriet Tubman had Epilepsy, actress Halle Berry lives with diabetes, business leader and Shark Tank superstar Daymond John is dyslexic and Stevie Wonder is blind. Each of them is a positive role model for success.

Knowles is an example of how having a disability does not have to starve one’s hunger for success and creativity. From her performance art to her social activism, Knowles is giving everyone – no matter which race or disability – a seat at the table.

Each day during Black History Month, we will post pieces about African American role models with disabilities. Read more today:

A son of Mexican immigrants and a first-generation college student, Bryan Munguia learned first-hand about the alarming lack of diversity that exists in the entertainment industry and wants to increase diversity to break negative stereotypes in society.

Next: Halle Berry: Living with Disability While Taking a Stand against Domestic Violence