At the height of her career, Missy Elliott experienced a dramatic and dangerous weight loss; she was diagnosed with Graves’ disease, which attacks the thyroid. 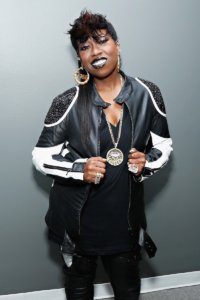 Forty-six-year-old businesswoman, rapper and Grammy award winner Missy “Misdemeanor” Elliott never has had it easy. She was born and raised in a “rat infested shack” in Virginia. As a child, she watched her father brutalize her mother and at the age of 14, she was raped by her cousin. It was only after begging her mother to leave her father did the two women escape and Elliott began the start of what was going to be a tumultuous and exceptional career.

In the early 1990’s, Elliott started an all female R&B group called ‘Sista’ with three close friends. The four young women performed and recorded an album that was never released. During this time, they joined a large group of well-known artists called “Swing Mob” where Elliott was able to get her voice featured on tracks along side world famous singer Mary J Blige.

Upon leaving Swing Mob, Elliott and long-time friend of hers Timbaland (Timothy Mosley) became a well-known duo, producing, writing and creatively directing music videos and songs together. Quickly, her raps became a staple to every track the duo produced and it was not long before other artists wanted to work with her – most notably Bad Boy Records.

Elliott’s career took off. The first album she produced was called Supa Dupa Fly in 1997. The album went platinum and not only paved the way for many other black, female artists but also set her on a path to stardom. Her fourth album, Miss E…So addictive sold more than 2.1 million copies. She has won four Grammys and has been nominated for countless other awards.

At the height of her production career in 2008, Elliott experienced a dramatic and dangerous weight loss. As a result, she experienced extreme criticism from both her fans and the media. She was diagnosed with Graves’ disease, which attacks the thyroid. Symptoms can include hair loss, tremors, muscle weakness and bulging of the eyes.

“I couldn’t write because my nervous system was so bad – I couldn’t even use a pen,” she said.

Elliott disappeared from the limelight for many years after her diagnosis but surprised fans everywhere when she debuted her rap skills once again on a track with singer Katy Perry in 2011.

“I believe in a higher being,” she said. “And that gives me faith to be strong and go on.” Elliott told the media that with proper exercise and diet she learned to manage her disease, after undergoing radiation combined with medication.

Since then, she has co-produced a chart-topping song with Pharell Williams and sang alongside former First Lady Michelle Obama.

Role models such as Elliott make a big difference in setting high expectations for youth with disabilities. People with disabilities of all backgrounds can be amongst the highest achievers on earth. Harriet Tubman had Epilepsy, actress Halle Berry lives with diabetes, business leader and Shark Tank superstar Daymond John is dyslexic and Stevie Wonder is blind. Each of them is a positive role model for success.

Fully one-in-five Americans have a disability. This includes 27 million women, 40 percent of whom are sexually assaulted at least once in their lifetime. The rates are disproportional. Elliott has not let any of these statistics define her as she continues to show off her rap skills.

Previous: Starting with “Yes!”: Tips for Making Your Faith Institution More Inclusive of People with Disabilities