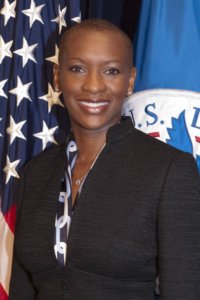 Claudia Gordon is recognized as one of former President Barack Obama’s key advisors for disability issues. She was also the first female deaf African American lawyer to graduate law school and pursue a career devoted to helping individuals with disabilities. Today she works in a senior role at Sprint, a company with many accessibility features that enable people who are deaf to communicate.

At the age of eight, Gordon began to develop severe pain in her ears, which resulted in her becoming permanently deaf. She faced discrimination in her own home country of Jamaica and realized she could not stay there, so she attended high school and college in America. By junior year of high school, she knew being a lawyer was the career she wanted to pursue. Gordon never let doubt or fear be a hindrance in her life. She made the best out of her disability and prospered.

Gordon studied political science at Howard University, one of America’s most famous Historically Black Colleges and Universities, and graduated with a Bachelor’s of Arts in 1995. She completed law school at American University. Upon graduating, she was offered several positions in various government agencies.

“Thanks to the values that were instilled in me during my formative years, I understood then that those voices of doubt neither dictated my worth nor my capacity,” said Gordon. “I want to contribute to a better society where there is more understanding and acceptance of people with disabilities and where the same opportunities are provided for all” she added.

Gordon worked as a Senior Policy Advisor for the department of Homeland Security. In 2005, her primary duty was enforcing executive orders for individuals with disabilities in emergency preparedness situations such as Hurricane Katrina in New Orleans. In 2004, Gordon served as vice president for the National Black Deaf Advocates. She also received the Paul G. Hearne/AAPD leadership award from the American Association of people with disabilities. In 2013, Gordon served as public engagement advisor at the White House working with the disability community.

The discrimination she faced growing up did not stop Gordon from achieving her goals. “It is uplifting when you are able to empower another and help someone discover a sense of self worth and confidence in his or her abilities,” she said of her efforts to continue to inspire many, especially those who are deaf as well.

Fully one-in-five Americans have a disability, and polls show that most of them want to work. Yet 70 percent of working-age Americans with disabilities are outside of the workforce.

Today there are 1,199,743 black students (K-12) with diagnosed disabilities in America; however, the deck often is stacked against them. While students with apparent disabilities such as deafness and blindness are identified, frequently “invisible disabilities” such as ADHD and dyslexia are not diagnosed and students do not get the supports they need to achieve.

Frustrated, they can act out and become suspended. Studies show that when students miss too many days, they get so far behind in class that it can lead to them dropping out of school and entering the school-to-prison pipeline. Today there are more than 750,000 people with disabilities behind bars in America. Indeed, half of all women who are incarcerated in America have a disability. The majorities of them do not have high school diplomas, are functionally illiterate and are people of color. There are more approximately 150,000 people who are deaf/hard of hearing incarcerated today, and approximately the same number are blind. Helping Educate to Advance the Rights of the Deaf (HEARD), an all-volunteer nonprofit organization that promotes equal access to legal system for individuals who are deaf and for people with disabilities, advocates for them full time.

All throughout Black History Month, we will post pieces about African American role models with disabilities. Read more today:

Next: Clarence Page Credits ADHD with Making Him a Better Journalist