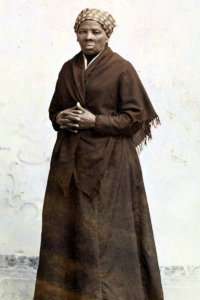 “I had crossed the line. I was free; but there was no one to welcome me to the land of freedom. I was a stranger in a strange land,” she often is quoted as saying.

It is through determination, courage and strength that Tubman was able to free many slaves. She did not let her disability keep her or those around her enslaved. Tubman is a prominent figure and was not afraid to be a leader as an African American, a woman and a person with a disability. She is truly a hero to all.

In 2016, the U.S. Treasury Department announced that Harriet Tubman would replace Andrew Jackson on the 20 dollar bill. While that has not yet happened, it would be a great way to honor Tubman and her achievements that impacted America in many ways.

People with disabilities of all backgrounds can be amongst the highest achievers on earth. Actress Halle Berry lives with diabetes, business leader and Shark Tank superstar Daymond John is dyslexic and Stevie Wonder is blind. Each of them, like Tubman, is a positive role model for success.

All throughout Black History Month, we will post pieces about African American role models with disabilities. Read more today: