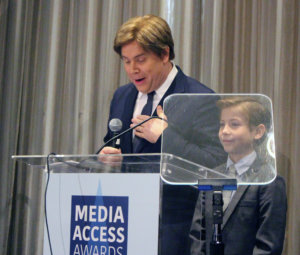 Beverly Hills, Nov. 18 – When Stephen Chbosky was asked to present an award at the 2017 Media Access Awards to producers Todd Lieberman and David Hoberman on Friday, he thought it was something through the Producers Guild of America.

In an interview with RespectAbility following the awards, he expressed his surprise at the existence of the Media Access Awards – and the plethora of talent with disabilities available.

“I cannot tell you how inspired I was to be in this room today with these amazing people, these incredible talents,” he said.

He and Wonder star Jacob Tremblay presented Lieberman and Hoberman with the 2017 Producers Guild of America George Sunga Award at the Media Access Awards, which honor individuals who are showcasing the disability narrative.

Forty-seven-year-old filmmaker, director, novelist and screenwriter Stephen Chbosky has been active in the Hollywood media scene since the early 1990’s. Some of his most popular works include the renowned coming of age novel turned movie, The Perks of Being a Wallflower, and the live action version of The Beauty and The Beast, both starring actress Emma Watson. Chbosky started his career by writing, directing and acting in a film called The Four Corners of Nowhere after graduating from the University of Southern California’s film school.

Eleven-year-old Canadian child actor Jacob Tremblay’s break out role was in the live action animated version of The Smurfs. In 2015, he was awarded the Critics Choice Awards for Best Young Performer for his role as Jack Newsome in the film Room. Both of his sisters, Emma and Erica, are actresses as well.

“My character Auggie is a stand in for any kid with a disability trying to find a place in the world,” Tremblay said at the awards on Friday.

Yet Tremblay himself does not have the disability he portrays.

“Imagine if only five percent of female characters were played by women,” the paper notes. “It is a matter of social justice to have a large segment of our population authentically represented in the mass entertainment… It is necessary to create an environment where actors with disabilities have access to play characters with disabilities.”

While the casting team did look for a child actor with the disability represented, they ultimately chose Tremblay.

“I would have preferred for them to cast an actor with disability. But Auggie has an unusual disability—there aren’t a lot of people who have it and who are children and who know how to act,” RespectAbility President Jennifer Laszlo Mizrahi said. “The fact that Lionsgate made this movie is very important—they chose A-list actors, and you can expect that a lot of people will see it and learn a lot about respecting people with differences and how bad it is to bully people.”

Following the awards, Chbosky said in an interview with RespectAbility, “I want to say to all my fellow directors and producers out there… to think all the time when you are casting, including background casting, to always include somebody with a disability or to think about characters out of the box… And let’s broaden our minds and really bring our stories and their stories to everyone.”

Next: David Hoberman and Todd Lieberman Pledge to Cast More Actors with Disabilities in Films