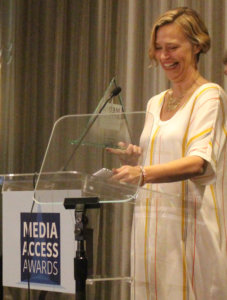 Beverly Hills, Nov. 18 – Called “champions of casting people with disabilities in Broadway shows and television programs” by presenter Michael Patrick King, Telsey & Company received an award for their inclusive casting at the Media Access Awards, which honors individuals who are showcasing the disability narrative and are doing diversity right.

“It’s important to include stories of inclusion for all people,” the team accepting the award said. “When we open up a script and see a story includes people with disabilities, we get really excited … because we love to explore new pools of talent and learn about new opportunities we may not have experienced.”

They casted Atypical, whose creator also was honored at the Media Access Awards, and Love You More, a show featuring nine actors with Down syndrome.

Telsey & Company was founded in 1988. They are an award-winning organization of casting professionals in New York City and the Los Angeles areas with local, regional, national and international clientele. They have projects in all forms of media in performance art including film, TV, Broadway musicals, Broadway plays, commercials and voice-overs.

Their goal is to have artistic integrity of the projects and collaboration with the producer and creative team to produce the best outcome. They previously won the Emmy for casting the pilot of Ugly Betty as well as nominations for This Is Us, Grease! Live and The Big C.

Read the profile on Michael Patrick King awarding Telsey & Company with the award on our website: https://www.respectability.org/2017/11/18/michael-patrick-king-emmy-winning-creative-behind-norm-bending-television.