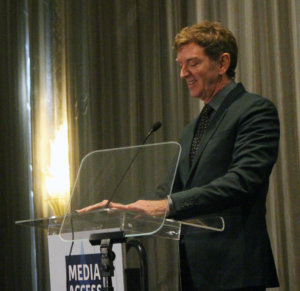 Beverly Hills, Nov. 18 – Emmy-winner Michael Patrick King of Sex and the City and the new disability-inclusive Love You More presented an award during the 2017 Media Access Awards, which honors individuals who are showcasing the disability narrative and are doing diversity right.

King presented the 2017 Casting Society of America Award to Telsey & Company, calling them “champions of casting people with disabilities in Broadway shows and television programs.” Telsey & Company is an award-winning organization of casting professionals in New York City and Los Angeles, with local, regional, national, and international clientele,

King has been directing, writing and producing entertainment for more than four decades. His career kicked off in 1975 when he began performing with a comedy improv troop in New York City. Since then, he has written Will and Grace, served as the showrunner for Sex and the City and has been a part of countless other television series. King is known for being the brain behind norm-bending television.

His most recent project is the creation of yet another contrarian television series entitled Love You More. Under contract of Amazon and Warner Brothers, King wrote the new show that stars actress, comedian and co-writer Bridgette Everette. The series takes place in New York City following a cabaret singer named Karen (Everette). Karen is a wine and man-loving woman who is a counselor at an independent living center for people with Down syndrome. In order to gain insight for the script, King visited an independent living facility.

“When I asked the amazing woman who was running the home which of her personality traits was the most successful in doing her job, she responded: ‘My humor.’ Her response, and some subsequent conversations I’ve had with others in the community, gave me the sense that not only were we on the right path but our hearts were in the right place,” said King.

King said, “The residents will have the same personality conflicts, the same struggles and the same uniquely different points of view that you find in any other group of people.”

Love You More is available for streaming on Amazon Prime Video.

Next: Telsey & Company Wins Casting Award for Inclusive Casting of Actors with Disabilities