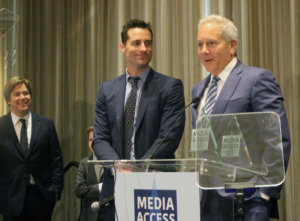 Beverly Hills, Nov. 18 – “I promise you,” producer David Hoberman said at the Media Access Awards, “from now on, we will look for more stories with disabilities and to cast people with disabilities in our films.”

He and Todd Lieberman, co-owners of Mandeville Films, were awarded the 2017 Producers Guild of America George Sunga Award at the Media Access Awards, which honors individuals who are showcasing the disability narrative and are doing diversity right.

They received the award for producing Stronger, which was about an amputee and Boston Marathon Bombing survivor Jeff Bauman, and Wonder, which tells the story of Auggie Pullman, a young boy with craniofacial disfigurement trying to navigate school, friends and life.

“We search for stories and we have ability to make stories that entertain but also mean something,” Lieberman said while accepting the award. “We have the responsibility to do so.”

“It is important to tell stories that have something to do with real life, show struggle, triumph, empathy and compassion,” added Hoberman, who was emotional during the awards. “We hope the world that [Stronger and Wonder] touches changes a little bit.”

Hoberman previously worked for Walt Disney Studios as president of the Motion Picture Group. He was responsible for overseeing development and production; during this time, Disney was in the top in the box office. He also is a professor at UCLA’s graduate film school, a member of the Academy of Motion Picture Arts and Sciences, the Academy of Television Arts and Sciences and the Producers Guild of America.

Lieberman previously worked as senior vice president for international finance and production for Hyde Park Entertainment. He is a member of the Academy of Motion Picture Art & Sciences, the Television Academy and the Producers Guild of America. He also is a judge for the Academy Nicoll Fellowship in screenwriting.

Read the profile on Wonder Director Stephen Chbosky and child star Jacob Tremblay awarding David Hoberman and Todd Lieberman with the award on our website: https://www.respectability.org/2017/11/18/wonder-director-stephen-chbosky-calls-inclusive-casting-people-disabilities/.