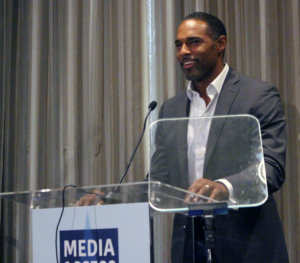 Beverly Hills Nov. 18 — Grey’s Anatomy actor, producer and father of three Jason George is taking off his scrub cap to put on a new hat. The actor turned activist has joined the fight for integration and equal opportunity for individuals with disabilities.

Born in Virginia, George has been nominated for both a Daytime Emmy Award as well as a Writers Guild of America Award. Prior to his leading role as Dr. Ben Warren on Grey’s Anatomy, George’s career kicked off in 1997 when he played Michael Bourne on the television soap opera Sunset Beach.

He has led a highly successful two-decade career in Hollywood and it is nowhere near over. He has been using his stunning brown eyes and white smile to captivate the attention of audiences both on and off the screen to spread messages of tolerance and acceptance. George currently is the active diversity chair of the Screen Actors Guild‐American Federation of Television and Radio Artists (SAG-AFTRA), a union of television and radio artists. It is through this position that he is taking steps to ensure that Hollywood is including all people.

“I have the honor of chairing the diversity advisory committee for SAG- AFTRA, which is essentially the United Nations for what we consider the protected class – all of those groups that are traditionally underrepresented in film and television and in media in general,” said George while speaking at the Media Access Awards (MAA), which honors individuals who are showcasing the disability narrative in a positive, accurate way. “So you have the senior committee, the women’s committee, the EEO, but I have to say the loudest most active committee that we have is our performers with disabilities committee.”

George was speaking at the MAA while presenting the Ruderman Family Foundation with the SAG-AFTRA Disability Awareness Award.

“If you say you are standing up and fighting for equal rights, you can’t just fight for the people that look like you,” said George. “You have to show up for yourself, of course, and get everyone invited to the party.”