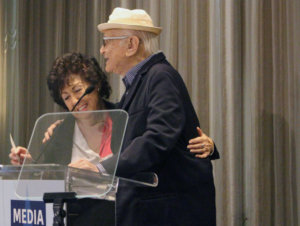 Norman Lear presented Field with the award. In response, she said how humbled she was to be “receiving a lifetime achievement award form someone who is responsible for my life.

Michael Keaton joined Lear and Field onstage, recalling that he starred in a short about disabilities for Field back in 1978, A Different Approach, which was nominated for an Oscar.

Field began her career at Norman Lear’s Tandem Productions as an assistant to the executive producer of Maude. She recently produced eight seasons of USA’s Monk. Field also was the consulting producer on the Indie feature film Shakespeare’s Cat. In 2007, she created a competition/game show that promoted the correct use of the English language for CSUSB Palm Desert Campus high school students competing for scholarships. A second special was produced in 2008 and they both aired on KCET Desert Cities. 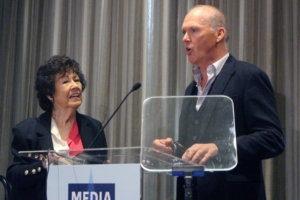 Her other credits include children’s programs, sit-coms, dramatic and action packed series, movies of the week and mini-series including stars such as James Garner, Mary Tayler Moore, Christopher Plummer, Sam Neil and many others. She was inspired by a character’s speech from Maude who survived a stroke that she produced a short comedy called A Different Approach, which focused on the encouragement of employment of people with disabilities. This changed the perspective of the entertainment industry and won an Oscar nomination. This led her to co-founding the Media Access Office and the Media Access Awards to recognize and encourage the accurate portrayal of people with disabilities in 1979.

Field has been honored for her work with inclusion, employment and accurate portrayal of people with disabilities in many programs which she has produced such for Just the Way You Are, a film for the Department of Mental Health. In the television industry, she dealt with the main topic on the sitcom The Baxters and an ABC Afterschool Special called The Day My Kid Went Punk. She introduced Geri Jewell on The Facts of Life as the first actor with a disability to portray a character with a disability on primetime TV.

She has received countless awards for her talented work, which include two Peabody Awards, two Humanitas awards and the NAACP Image Award. She also received the Distinguished Service Award for her work with people with disabilities from President Ronald Reagan and was honored at the 20th Anniversary Celebration for Persons with Disabilities.

Read the profile of Norman Lear awarding Fern Field with the award on our website: https://www.respectability.org/2017/11/18/norman-lear-receives-standing-ovation-media-access-awards.

Next: Grey’s Anatomy Star Jason George Fighting for Equal Rights of All People in Entertainment