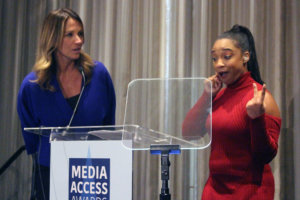 Beverly Hills Nov. 18 — Treshelle Marie Edmond took center stage to present an award to Aziz Ansari and Alan Yang for pushing the envelope on diversity and inclusion in Hollywood at the Media Access Awards, which honors individuals who are showcasing the disability narrative accurately.

Edmond is a talented actress who is an ASL performer and appeared on Ansari and Yang’s Master of None on Netflix.

“Some people don’t even want to try to communicate with a deaf person and seem afraid to talk to us or ask questions,” Edmond said in an interview. “We are just regular people too. Don’t be afraid. Talk to me! I love talking to people.”

“It was a beautiful thing for Alan Yang and Aziz Ansari to incorporate these important moments all in one episode,” she continued. “I can’t thank them enough for this opportunity in displaying deaf characters and deaf culture.

Edmond was the ASL Performer at Super Bowl XLIX February 2015 signing the National Anthem and America the Beautiful with John Legend and Idina Menzel. Television credits include House, M.D., Glee, Netflix’s Master of None and more.

Theater credits include Martha Bessel in Deaf West’s production of Spring Awakening on Broadway 2015-2016 and Children of a Lesser Go” production by Kenny Leon, Berkshire Theater Group, Stockbridge, MA. She is the first and only deaf woman of color to headline a Broadway production twice.

“People see me and see black, then they see a woman, and then they see deaf,” Edmond said in an earlier interview. “This means I have to work three times as hard to get the same opportunities. I get it from all angles.”

Next: Aziz Ansari and Alan Yang, Pushing the Envelope on Diversity and Inclusion in Hollywood